To begin with, there are dozens of characters to choose from, many from well-known Japanese manga/anime and video game series, including Doraemon, Dragonball Z, Pandora Crisis, and many more. Many fighters are original designs, and each fighter has plenty of unique and special attacks you can perform. The animations are excellent, and the controls intuitive. The computer players are very challenging - a lot of them will run up to you at lightning speed and perform 10+ hits combo before you can react. This may frustrate fighting game novices, although experts should welcome the chance to play a tough fanmade fighting game for once. The game is in Japanese, but it shouldn't be hard to figure out the controls If you enjoy beat'em ups, Fighters Kyodotai is a very well-made freeware old game that is well worth your time and the hefty download. Be warned of two minor weaknesses, though: the game doesn't let you change difficulty level or save key configurations. There is some nudity in the game, although it is not as nearly blatant as "Hentai" fighting games. 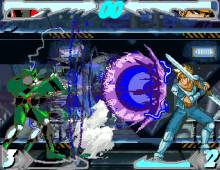 People who downloaded this game have also downloaded:
Idinaloq, Typing of the Dead, The