Typing of the Dead, The

The Typing of the Dead is a fun and addictive typing "game" from SEGA, essentially taking House of the Dead 2 and replacing the player's gun with a keyboard. This review of the Dreamcast version (which is identical to this PC download in every aspect except the PC replaces a couple of game modes with IPX multiplayer) at GameCritics.com says it all:

"A perfect example of such creative, atypical game design is Typing Of The Dead?published by Sega and designed by in-house team Smilebit. Typing Of The Dead is a bizarre little game, the likes of which has never been attempted before to my knowledge. [The game] takes the entire content and framework of the arcade-style shooter House Of The Dead 2, but replaces the light-gun with a keyboard as the main method of interaction. Players still progress through the game in a first-person perspective while countless hordes of zombies, monsters and various other enemies attack, but the twist here is that each creature has letters, words or phrases floating in front of them. Players eliminate the unsavory elements by typing the appropriate combination of characters in a speedy and (hopefully) error-free manner. To add some spice, each stage contains one or two short challenges with special requirements in addition to the general task of zombie depopulation. The game also includes a full-fledged tutorial which instructs the virtues of touch typing, as well as a choice between Arcade, Original, [or multiplayer] modes for gameplay enjoyment once a sufficient level of secretarial skill has been mastered.

Typing Of The Dead is a crazy, irreverent game, and such madness needs to be cherished whenever it appears, in my opinion. There's definitely an intrinsic, enjoyable quality to blowing off a zombie's head by typing the words "Rhythm Method." While some may not immediately see the appeal or value of a game that is played by typing, all it takes is five minutes on the keyboard to turn a crowd of naysayers into party people having a good time.

The main draw here is that the game is just raw, unadulterated fun. While House Of The Dead and its sequel were good gun games, Typing Of The Dead is just so much more enjoyable due to the funny words and phrases which add to the level of irreverence Smilebit aims at itself. With phrases and snippets like "I'll take him for 8 dollars." "La Dolce Vita," "Stop chewing on my toenails" and "Golf is seventeen holes too long," the silliness factor is a perfect match for the incredibly cheesy voices and stiff story scenes that the House series is famous for. The difference here is that it while it was embarrassingly bad in House Of The Dead, it works to create a comical B-movie atmosphere that makes people crack up while delivering the big sleep to hordes of evil leg-draggers in Typing Of The Dead.

A brilliant way the game subtly increases the appeal to people looking for a good dose of fun, the game has an excellent difficulty-adjustment system in place which makes sure players don't get overly frustrated. While going through a stage, the game will throw out long words and phrases with the first few zombies. If the player can type out the words quickly and with few errors, the zombies' floating marquees get longer and progressively more difficult the further a player goes without taking damage. Conversely, if a player's fingers fumble and you start losing chunks of flesh to the rotters, the game picks up on this immediately and shortens the required inputs starting with the very next enemy. Going from "Burned lingonberry pancakes" to "Disco ball" is a big difference, and makes it more enjoyable and accessible to those who aren't good friends with Mavis Beacon." Highly recommended. 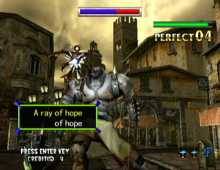 Typing of the Dead, The screenshot