Bust-A-Move 4 is the latest and arguably greatest in Taito's line of arcade puzzlers that are much more popular on console systems than PC. Adrenaline Vault's comprehensive review says it all:

"Anyone who's tried their hand at any of the series' previous installments will feel right at home with Bust-A-Move 4, as the basic premise remains the same. Regardless of the chosen mode of play, you are presented with a rectangular screen, on which there is any number of colored bubbles. As an animated character selected from a cast of ten, it is up to you to use your trusty catapult to fire randomly hued ammunition at the floating obstructions. Whenever you connect three or more similarly-colored bubbles, they pop, leaving all others that were clinging beneath them to fall away, thereby freeing up your screen. With the goal of emptying the screen, you carefully aim and fire away, either hoping to complete straightforward combos, or more billiard-like bank shots off the side of the play area. Much like the aforementioned Tetris, however, the omnipresent bubbles occasionally shift downwards, potentially pushing the foremost line past your catapult, and thereby ending the game. This time limit, combined with the increasingly feverish pace and mathematically-precise rebound shots can lead to some frenetic moments, almost lending an action feel to the gameplay.

There are a number of small variations which lend some additional flavor to Bust-A-Move 4. For example, players may occasionally find Star bubbles lying in their path, that will eliminate all onscreen instances of the color that they are struck by. Rainbow bubbles act as temporary obstacles, as they can only be eliminated once they've been shifted to a regular color, which in turn only occurs after a nearby cluster is popped. In the same vein are Anchors, which cannot be popped, only disappearing once all attached bubbles have been destroyed. Later levels will also reveal Elevators, which connect with a given bubble and float to the highest possible point, whereupon they transform into Anchors. The newest addition to the series is the Pulley, which presents players with the challenge of attempting to balance two cluster-laden anchors: burst too many on one side, and the other may threaten to drop below your catapult. Overload the two anchors, however, and the whole may shift downwards, prematurely ending the game. When combined, these elements bring a certain strategic element to the experience, something not always seen within the genre.

Bust-A-Move 4 offers a wide range of play modes in order to suit players of all types. First and foremost is the Arcade mode, which simply pits you against a number of increasingly difficult puzzles, without any real goal beyond point accumulation. If you're looking for somewhat of a background to your attempts, a Story mode is also available, sending you into the realms of various Tarot cards that threaten to undo all of existence. Players looking to test their skills will find their match within the Challenge mode, which sends you through 25 levels, subdivided into increments of five. After each set, you're graded on your performance, based on your average time, number of bubbles shot and burst, as well as your relative speed, technique and strategy.

Despite the appeal held by the single-player mode, competition is the true heart of Bust-A-Move 4. During such matchups, either against the computer or a friend, the screen is split in two with each person being presented with a rectangular playing area similar to that of the solo mode. Instead of simply trying to rid their own screen of bubbles, however, players are looking to flood their opponents. In order to do so, you must trigger Chain Reactions: popping a cluster that has a bubble or two attached to its bottom will cause said bubble to fly up and attach itself to an appropriately colored pair, bursting it. If this second cluster also had something attached to it, it too will seek out a match, continuing the cycle until there are no "spare" bubbles or available pairs. Once such a Chain Reaction occurs, a certain number of bubbles are dumped onto the opponent's screen, with the type depending on your selected character. Naturally, the larger the Chain Reaction, the more your foe is bombarded with bubbles. In this fashion, you can devise strategies and set up potential traps for your enemy; combined with the ongoing struggle to empty your screen, the competitive modes are guaranteed to keep you on your toes.

Despite its cutesy and oft-lackluster graphics, Bust-A-Move 4 comes across as a wholly addictive and highly entertaining experience. The childlike overtones keep the mood light and lively, though they occasionally prove to be more of an impediment than an advantage. Still, puzzle offerings have always been less about graphical and audio pleasantries than they've been about engrossing gameplay, which this title provides in spades. With over 600 levels, a solid editor and a fantastic multiplayer option, Bust-a-Move 4 proves itself to be more than the sum of its parts, and is certainly a worthy addition to any puzzle-lover's collection." 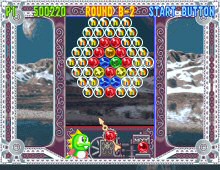 People who downloaded this game have also downloaded:
Bust-A-Move 2: Arcade Edition, Lemmings, Bust a Move, Lemmings 2: The Tribes, Lemmings Chronicles, The (a.k.a. All New World of Lemmings)