Gigantic Gear is an excellent (albeit short) freeware giant robot action game from Japan. Aside from sporting excellent 3D graphics, the game offers a few innovative features that set it apart from other "shoot everything in sight" games. The best feature is the ability to assemble your killer 'mech from choosing various parts: legs, weapons, etc., and see them in action. There are only 3 levels in the game, but they are quite large. The on-screen radar makes it easy to keep track of where the enemies are, and you can switch weapons during the game. If you enjoy giant robot games or action games in general, Gigantic Gear is well worth your time. Overall, another great Japanese freeware gem that boast very high production value. The game is in Japanese, but the shoot-all-in-sight gameplay makes language a bit redundant ;) 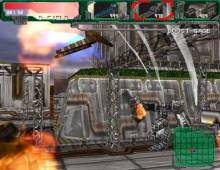