Kin Yeo Fighting Game is another entry in the long line of solid 2D fighting games from Softstar, Taiwan's leading game developer. The game features 13 heroes from Chinese mythology and folklore you can choose from, excellent VGA graphics, and fluid animation. The graphics are not as detailed or smooth as Panda's Sango Fighter, but they are much better than an average VGA fighting game, and far better than Softstar's earlier titles. Anyone familiar with Chinese myths will enjoy seeing special attacks that accurately reflect the legend (the oriental equivalent of seeing Zeus wield thunderbolt, or Neptune a trident). But even if you are not well versed in Chinese folklore, you will still enjoy seeing unique attacks that are different from the Mortal Kombat variety (one normal attack of a female heroine in the game is to summon birds with her flute, for instance). Two player VS mode is supported, and you can configure the controls from the main menu.

The game is in Chinese, but you will not need to read anything to finish the game - although it would help you understand the background of each character. Smooth graphics, challenging but not frustrating action, and intuitive controls earn a thumbs up for this game, one of Softstar's best action games. 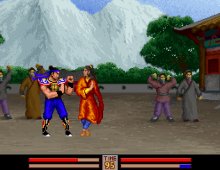 People who downloaded this game have also downloaded:
Fighters Kyodotai (a.k.a. Fighters Kototai), Gigantic Gear, Typing of the Dead, The, Mario's Game Gallery