FormulaPC is an excellent fanmade PC version of Formula Dť, a unique board game from EuroGames that captures the spirit of Formula One racing in a whole new way: on the tabletop.

Like its board game original, FormulaPC allows up to 5 computer or human players (each controlling an F1 team) to compete on various tracks. You can change the race length (1 lap, 2 laps, 3 laps, or qualifying), the circuit to race on, and even create custom team files - using your own bitmaps for team logos and driver pictures. The goal, of course, is to be the first to cross the finish line.

If you wonder how the frantic pace of F1 racing can be captured in a turn-based board game, FormulaPC and its board game counterpart proves how to do it. The game is played by rolling the dice that corresponds to the gear your car is currently in, then move your car the number of spaces shown by the die. At the end of your turn, your car is considered "stopped." The concept of stopping is important in negotiating corners, because you must make at least as many stops as shown on the yellow flag besides the corner. During a race, your car will suffer wear on five major parts (tyres, brakes, fuel, bodywork, and engine), each of which start with a fixed number of Wear Points. Similarly, every action you can perform in a real race is simulated by spending various kinds of points: Brake Points for braking, Tyre Points for overshooting a corner (imagine the tyres screeching), a combination of Fuel, Brake, and Engine Points for over-revving (i.e. skipping gears), and many more. Throw in collision and pit stops, and you have an incredibly realistic racing simulation that doesn?t require reflexes to win.

FormulaPC is a very faithful PC conversion of the superb board game that adds many extras, including a track designer you can use to design your own circuit. The current version even allows for the possibility of using non-F1 race cars, so in the future races can be run using touring cars, stock cars, etc. by changing parameters in the game. If you have played Formula Dť before, FormulaPC is a must-have. If you haven?t, check out one of the most compelling and unique board games available today. Highly recommended! 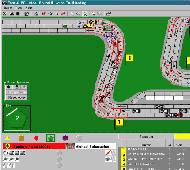