Metro is a cool Java implementation of an abstract board game of the same name, designed by Dirk Henn. The game starts with an empty square board. Basic rules, from the official site for this six-player game go as follows: "each player has metro stations in their own color at the edges of the board. They try to make the metro lines that start at their stations as long as possible. Each square that the line visits is one point, and the points of a line double if the line ends in the center of the board. Each turn each player can place one card. The player can use this card to extend its own lines, or to shorten the opponents lines. However, lines of only one tile are not allowed, unless there are no other places to place your card. The game ends when the board is filled.

In order to make things easier, the program shows unfinished lines in the player's color. Often you just want to extend your own lines, but sometimes it can be better to cut your opponents short! It is all allowed. The computer players are strictly programmed to maximize the number of points you have, except when there are only two players."

This PC version preserves the fun of the board game, offering tough AI opponents (even with varying strength levels you can toggle) and a well-designed interface. The game can be played for 2 to 6 players, any of which can be either human or computer-controlled. Because you earn 1 point for every tile on the continuous track you lay from the starting station, and you can only have one tile per turn to place, Metro is mainly a tactical game: you are concerned only with what your best move this turn should be. In the game, it is possible to form a track so that it loops over the same tile more than once, and you get 1 point for each time it crosses a tile. If the end point is in the center of board, the track is worth twice as much, therefore doubling the score. Like the original board game, your main goal is to extend your own tracks, and secondary goal is to terminate other players' tracks. Simple to learn, but hard to master and quite addictive. Highly recommended for all fans of tile-laying or general abstract strategy games. 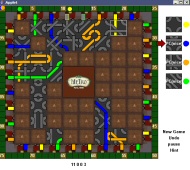