Fearsome Floors is an accurate Macromedia Flash conversion of a neat German board game of the same name (called Finster Flure in German). The goal is to get the yellow smilies (i.e. your opponents' playing tokens) eaten by the monster, while making sure all of the green smilies (i.e. your tokens) survive. During the game, you move one smiley after the other in turn. After all playing tokens are moved, the monster will make its movement automatically (triggered by the monster movement tiles) to eat the smilies in sight. So during your turn, you must place your smilies behind stones to try and hide, or to attract the monster to move it to nearer opponents.

In most levels, there are already some items (stones, smilies, the monster, crystals etc.) on the board. You place more items, and then see what happens when the monster starts running. If all the green smilies survive, you won the level. This PC verson has some new rules or changes from the board game:

When the monster runs off the board, he reappears at the other end on the same line.

There's an additional field (a red cross). If the monster hits this field, it immediately dies.

There are no teleporters.

The blood stains get shoved as well when there's a stone in front of it.

Although the game is in German, it is easy to understand and play after you read basic rules (you can download the PDF manual below). It is also a Flash program, meaning you can play it on just about any computer that has Macromedia Flash player. The graphics are almost identical to the board game, and the computer AI is no pushover. The current version already has approximately 20 levels, with more in the pipeline for future versions. Highly recommended to anyone looking for a fun, 'quickie' turn-based games in the vein of Space Hulk, but one that can be finished in one setting. 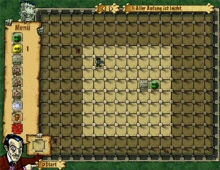