Battlestar is a space combat game similar to the popular board game Battleships. At least that is what it looks like to me as you start the game with a certain amount of missiles and a list of how many enemy ships you have to hit before you win.

The game map is divided up into small fields and you can shoot a missile at each field. If you are lucky you will hit an enemy ship and if not you have to try a different field. Once you have hit all enemy ships on a screen you can use fuel on getting to a new area where you have to start over again. You can fire missiles through different setups and also view the battle area at different views but when everything is considered it still work pretty much the same way.

The graphics are very simple and so is the sound included. You can turn of the sound as well although Battlestar is not one of the games with an annoying beeper sound. I don't really know what the developer wanted to game to be but to me it looks like the game is missing something simple because the game just continue and continue with the same during the entire game. Overall a boring game that doesn't offer anything special of notice.

Battlestar is a competent PC version of popular Battleship board game -- no more, no less. The game replaces the ships with nice-looking spaceships, but otherwise the gameplay remains identical: try to correctly guess the locations of the opposite player's five spaceships before your ships are discovered and destroyed. You can play against the computer or another human player, and the computer's AI is not half bad. Overall, if you like the board game, Battlestar is worth a look. If you want something based on the same idea but with more challenging twists, though, try Fathom It! (reviewed on this site) instead.

You play Bad Onion, an onion with an attitude! You must use skill, cunning, quick reflexes to jump platforms and maneuver yourself around various obstacles. You must also manage to avoid vicious vegetables that lunge towards you, trying to stop you from completing your quest, to collect all the emeralds and banish the ghost of Gumple Bumperdink from Onion Land. Bad Onion includes twelve levels. 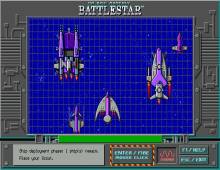