Xiao Xiao series are short, immensely entertaining Flash snippets featuring stick figures who punch, shoot, and maim each other to the death in the true "organized chaos" style of Oriental films. Each subsequent Xiao Xiao releases is longer, featuring more elaborate fighting moves that are amazing to watch... especially considering that you are watching two-dimensional stick fighters. Xiao Xiao 4, the latest in the series, is no longer a passive Flash movie like Xiao Xiao 3 but a fun FPS in the style of SEGA's Virtua Cop in a Hong Kong gangster movie setting.

Xiao Xiao 4 is essentially a "rail shooter" similar to SEGA's The House of the Dead series. In short, you are armed with a 6-bullet pistol, and "led" on a predetermined path through the game, and must shoot at stickmen baddies who appear along the way. Gameplay is an extremely simple affair of shoot, reload, and shoot. You can't even dodge bullets or bombs: the only way to stay alive is to shoot the baddies before they shoot you. If you are quick enough, you can also shoot at non-bullet objects such as knifes and bombs before they hit you. There are 3 different difficulty levels in the game, with the only difference being the number of "continues" you have before it's game over.

What makes Xiao Xiao 4 a blast to play are the same reasons all previous Xiao Xiao movies are popular: the designer's uncanny cinematic sense, flawless animation of stick figures, and an unmatched creativity when it comes to designing different ways to die ;) In addition to stickmen baddies, Xiao Xiao 4 features excellent wireframe 3D buildings and other objects. Anyone who remembers the cool reproduction of The Matrix' mid-air-kick scene in Xiao Xiao 3 will be in for another pleasant surprise in the final fight scene of Xiao Xiao 4. Overall, a wonderful Flash timewaster that is sure to keep you hooked for the few minutes it will take to complete it-- and for the many more times it will entice you to replay ;) 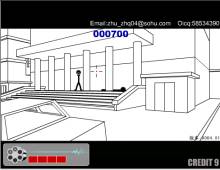 People who downloaded this game have also downloaded:
House of the Dead 2, The, X-Men: The Ravages of Apocalypse, Raiden II, Fight Man (a.k.a. Xiao Xiao 9), X-Men: Children of The Atom