The House of the Dead 2 is a near-flawless PC conversion of the hit arcade game of the same name. The game is a ?rail shooter? like the first game, i.e. you are ?led? by the game down a path similar to Rebel Assault, shooting at zombies and other monstrosities that get in your way. Although the English version that is being distributed by Empire Interactive unfortunately doesn?t ship with the PC gun like its Japan counterpart, HOTD2 still manages to be a fun and addictive FPS that everyone should enjoy.

Similar to its predecessor, HOTD2 is not a ?shoot everything in sight? game. You have to be careful not to hit any innocent civilian, and rescuing them from the clutches of the monsters often rewards you with power-ups or, better yet, new paths to follow. This makes the game somewhat replayable as you can do something different (e.g. saving someone?s life as opposed to watching him die in the last game) to open up new branches. As well as the original arcade modes, there is plenty of extra effects. There are 5 game modes including Arcade and Boss, 12 different kinds of zombies including the chainsaw wielding Max and the disgusting Ebitan. End-level bosses are appropriately difficult to kill, although some of them are far too easy to dispose of once you find their weak spots. With an excellent co-operative multi-play option (across LAN) and 6 chapters of mayhem, HOTD2 is a much more attractive, varied, and longer game than the original. Be warned, though: near-superhuman reflexes and tenacity are prerequisites to finishing one of the best rail shooters ever made. There are even plot twists to keep things interesting, as well as multiple endings.

That's it; no independent movement is really necessary because the game pulls you along a predetermined path. House of the Dead 2, from Sega PC and Activision Value, requires little thought, and it seems a surprise that there is really any plot at all.

However, to its credit, Dead 2 is a fast-paced game, and you do have to pay some, albeit little, attention. After all, some of the monsters you will face are seemingly impregnable, unless you have noticed where their weak spots were in the onscreen manual that quickly opened to reveal a detailed sketch of the creature. Sometimes, the weak spots aren't even on the monster that you are fighting.

The crux of the game is basically this. A gentleman named Goldman was messing around, conducting Genome experiments, and as a result, mutated creatures and bloodthirsty zombies are roaming through a town. With an unending supply of ammunition, your task is to skip from chapter to chapter, blasting the creatures into oblivion while trying to save as many civilians - who are being pursued by the vile creatures - as is possible.

"How could anyone do this?"

That phrase is repeated over, and over, by the various characters, and not does it seem little more than a fill phrase that boasts a profound grasp of the obvious, but the lack of emotion by the voice actors really does little to help it make an impact. The sound of the game does seem to have a bit of a problem. The game features subtitles, with voice-overs. But there are instances when the vocals are drowned out by other sound - and it doesn't seem intentional, because it can be sporadic. For example, there is a scene early on when the trio of agents is in a speedboat. While there are subtitles, you can't hear the voice acting, but only for a moment or two. Then it comes back up to the top of the volume chart.

The game has three playing modes: arcade, original and boss. There seems little difference in the style of play between arcade and original, while boss mode merely allows you to battle the boss monsters that show up at the end of each chapter of the story.

The two-page instruction booklet states that the game is non-linear, but the game only seemed to change slightly if you shot randomly at objects as you were pulled down the game path, or saved civilians. Nor was it readily apparent if the character I player actually picked up the hidden items that he located by shooting barrels and other environmental objects. The game has made it easy in that regard. To gain an object, shoot it. After all, this is a first-person shooter game.

Another problem is the lack, or seemingly lack, of a save function. The options menu didn't have a save or load feature. There wasn't an auto-save that was apparent, and the manual did not show hot keys for a save feature. While the game may be easy to work through, beginning over from the start on each launch is a little bit of a pain.

Graphically, this program is nice. The three-dimensional polygons of the targets are well rendered, and the environment seems somewhat interactive. The audio track does little to bolster the graphical elements.

Controls are exceptionally easy to get a handle on.

House of the Dead 2 is derived from an arcade shooter game, and when viewed in that regard, it is easy to understand the set-up of the program. The feel of the arcade game is there, from the scoring system, to the flow of the game. If the object of an FPS is to blast away, Dead 2 accomplishes that very well. A little freedom in movement would have been nice, but if you are looking for a game in which all you need do is be fast on the trigger, this may be your game. 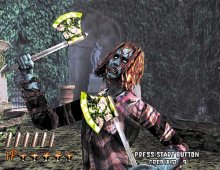 House of the Dead 2, The screenshot