One of the first action games that look better on PC than the console, Turok Dinosaur Hunter is an excellent and innovative first-person shooter that is much more of an action-oriented exploration title than your average Quake clone. Shawn Quigley of the Adrenaline Vault says it all about this 3D game:

"Turok Dinosaur Hunter on the PC is a direct port of the popular N64 game. To pull off the graphics and effects that a N64 can handle, Acclaim made the bold move of making the title require a 3D accelerator. What this gives gamers is a game that actually looks better on the PC than the N64, mainly because of a higher resolution. It also carries over some of the limitations that the N64 has.

The concept behind Turok Dinosaur Hunter is loosely based around a comic book hero, Turok. There is a storyline weaved throughout all the action found in the game; Turok learns of an arch-nemesis, the Campaigner, who has plans to conquer Earth. To defeat the Campaigner it is up to Turok to locate all the pieces of a mystical weapon, the Chronosceptor. With the Chronosceptor, Turok will have enough power to rid the Campaigner from the Lost Land.

A lot of people wanted to compare Turok to the Quake titles, but that is not a fair comparison. Turok is more of an exploration and adventure title that includes a lot of cool action. Dave Dientsbier, Lead Designer/Project Manager, explains it like this, "You have to understand that Turok was never intended to be merely a 1st person shooter. It's as much about exploration and discovery as it is about blasting."

There are 14 weapons found throughout Turok, and they're some of the most intense you will find. You start out with a knife and progress up to rocket launchers and other weapons of mass destruction. Although many people will tell you that the knife is a weak weapon, it actually is very good. If you can move around fast enough and run and slice at the enemies at the right moment, you will take them out and earn special bonus points. This, of course, does not work on all the enemies in the game. If you used this technique on some of them, you would not even make it two steps towards them before they blew you away with a projectile weapon. All the weapons are fun to fire, but I particularly found the tek bow and arrow the most exciting. There is something to be said about seeing someone perched on a cliff in the distance, then seeing them grab their neck as you put an arrow in them. This effect is excellent and should be used in all games.

As you travel through the levels in Turok, you will come across save game shrines. You cannot save at anytime during the game. Instead you have to seek out these shrines. This is directly related to how it worked in the N64 version. This will cause a certain level of frustration for gamers, but it forces them to not rely on saving the game to win.

During certain parts of the game, "warp" fields will appear that players can jump into. These bring the player to challenge levels that give them a chance to gain health, lives and other things. These challenge levels are mainly made up of jumping puzzles that require you to cross over to the different areas. There are certain areas that are made up of high pillars or other cliffs that require you to navigate them by jumping. Players will often see their characters falling and spinning into the darkness below because of a mistimed jump. This can be frustrating and more difficult than it was on the N64 version. The controls that players need to get accustomed to do not lend themselves well to looking around and jumping.

Turok is a fun game that is a great change of pace from the other 3D shooters out there. If you are looking for a change, and can be patient with the controls and console-like puzzles, then you will love Turok." 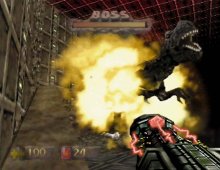 People who downloaded this game have also downloaded:
House of the Dead 2, The, Carnivores 2, Teenage Mutant Ninja Turtles 3: The Manhattan Missions, Metal Gear Solid, X-Men: Children of The Atom