Arguably the best "hunting simulator" ever made, Carnivores 2 is an excellent budget game that proves that not every hunting game is Deer Hunter clone. PC Gameworld says it all about what makes this a FPS well worth a look:

Carnivores 2 is a very good hunting simulator on the market. Why? Because it comes dangerously close to feeling like a pure FPS shooter at times. The idea is to hunt for dinosaurs on a Jurassic Park-type island. From a true gamers point of view it is much better to be hunting (or being hunted by) an eight ton Tyrannosaurus Rex than Bambi.

You get your usual assortment of hunting weapons and gear. Pistols for the poor, crossbows for the skilled, and shotguns for the wise. The gameplay is what you would expect, except that you score points for each type of dinosaur you bag, and you then use up the points buying licenses to hunt certain species, and to "buy" your way to bigger weapons and more dangerous islands. This gives the game a touch more gameplay than expected, and it does help maintain your interest longer. You won't be playing this game by this time next year, of course, but it is still not bad.

Graphically the game is surprisingly impressive. The outdoor 3D engine is smooth, even at higher resolutions, with decent lighting, varied terrain and foliage textures, and the overused sun flare to round things out. Following a blood trail up and over hills and through dense thickets of trees does give a real feeling of hunting. Various animals walk by (including slow fat ones who give you no points but are nice target practice), Pterodactyls fly around overhead, and you can even see the huge Brachiosaurus feeding itself on seaweed down by the shoreline. The prey acts predictably; it's fight for the carnivores and flee for the herbivores.

The sound is subdued but nice, and the 3D sound is downright impressive if you have support for it. Overall the game supports Direct 3D, Glide, Direct Sound 3D, A3D and EAX. Not bad for a game under $20.

As with all budget titles, the price is the best thing about Carnivores 2. But do not grimace if you find this one under the tree this Xmas. It's fun, fairly involving, and it looks and sounds almost as good as a game you would pay full price for." Definitely a great entry from Action Forms, developer of another underrated FPS called Chasm: The Rift. 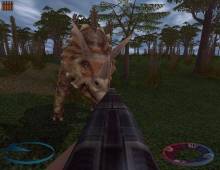 People who downloaded this game have also downloaded:
Carnivores: Ice Age, Blood 2: The Chosen, Turok: Dinosaur Hunter, House of the Dead 2, The, MDK