One of the most innovative first-person shooter games ever made, Shiny Entertainment?s MDK (short for ?Maim, Destroy, Kill?) sets new standards in the crowded genre popularized by the likes of Quake, and shows the world that there could be much more to the genre than the formulaic shoot-enemies-and-collect-keys-to-open-doors gameplay. In combining drop-dead gorgeous 3D environments with a good variety of arcade-style gameplay, MDK is a unique offering where quick reflexes, timing, and even a little wit are required to survive.

The game casts you as Kurt, a leather-clad killing machine sent to destroy aliens intent on invading Earth. Thankfully, this banal premise is the only bad thing you can say about MDK (other than the relatively short length, but we?ll get to that later). Equipped with a high-tech sniper suit and a futuristic gun, you will advance through one exciting level to the next, each with many unique and unexpected gameplay twists that go above and beyond the mere ?different backgrounds/enemies/weapons? modus operandi of most FPS games. You will not only run, dodge and jump over obstacles, but in many locations also fly or glide over the beautiful landscape. In some levels such as the beginning scene, you can?t use your weapons at all but must only dodge incoming fire. The best gameplay twist in the game is undoubtedly the ?sniper mode?. The game allows you to switch to a view from inside Kurt?s sniper helmet at any time, where you can zoom in to target distant enemies with pinpoint accuracy. This new perspective obviously lets you use a stealthier strategy than what most FPS games allow.

Graphically, the game is very pretty to look at, although they are not as detailed when viewed up close. In contrast to games such as Quake, the expansive levels in MDK clearly aren?t designed with exploration in mind: you?ll simply proceed from room to room in a very linear, led-by-the-nose fashion. This would normally be repetitive, except that the wonderfully unique environments and great gameplay variety makes playing the 50-plus level a pleasure rather then a chore. In contrast to most FPS, you can store power-ups in your inventory to use them later. Like the rest of the game, power-ups are unique and fun to use, most with funny names such as The World?s Most Interesting Bomb and The World?s Smallest Nuclear Bomb.

The biggest problem with MDK is that it is very short. Even beginners to the genre should be able to finish the whole game in 10 hours or even less. This is a boon to beginners, but arcade veterans may scoff at the lack of challenge. Still, with very stylish presentation, unique twists, and a thoroughly addictive gameplay, MDK is definitely a must-have for fans of the genre. Just don?t expect a ?serious? or realistic shooter, but a fun FPS highly steeped in the best tradition of arcade/platform games. 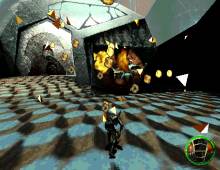