Blood 2 is a fun sequel to Blood, a cult classic FPS from Monolith. Instead of the Build engine used in Blood, Blood 2 designers opted this time to use the enhanced version of Monolith's in-house LithTech engine. Your protagonist, Caleb, is back to fight the CABAL, an evil cult that worships the Dark God Tchernobog.

BLood 2 is essentially bigger and better Blood. There are more weapons, enemies, and levels than in the previous game. The level design, one of the highlights of Blood, is even better in this game: in the first episode alone, you will travel from a museum to a huge science facility, to dark city alleys, and finally to a futuristic flying machine. Caleb's funny and witty one-liners are back, and the soundtrack is even better than in the original game. As in the first game, Blood 2 offers a lot secret passages and other pleasant surprises. You can also choose not to control Caleb but some other protagonist who is among "the Chosen." Each of the Chosen has a different weapon specialty and comes with their own set of taunts. But you will see the mini-movies and hints during the game only if you play as Caleb. The graphics are also much better and clearer drawn than Blood. Instead of blurry, dull palette, you see vivid environments brought to life in SVGA, with plenty of detail.

When all is said and done, though, the game itself doesn't feel as fun as Blood. Perhaps it is because a lot of so-campy-it's-funny elements have been replaced with a more ominous plot and more threatening monsters. But Blood 2 still remains very entertaining and highly replayable, especially with fun multiplayer levels and a full map/level editor.

Simple, bloody fun... Blood 2: The Chosen is an exercise in gory, old-school gameplay, based on the premise of 'Shoot first, ask questions later'. The sequel to the Duke 3D-powered 'Blood', set a hundred years after the original, delivers just what it says - blood, and plenty of it! The gameplay itself is standard fare blowing the crap out of everything in your path gameplay, but what it lacks in originality it makes up in style and the smart ass quips that your chosen player makes as he/she reduces enemies to a shower of blood and entrails.

Playable characters include Caleb, the vicious main character from the original Blood, his cold-blooded love Ophelia, the ruthless Ishmael, or warrior Gabriela. Depending on who you choose will determine how you play the game, as certain players have different abilities including magic powers.

Blood 2: The Chosen uses Monolith's LithTech engine - one of the most advanced next-gen 3D engines in gaming. Well, at least it was at the time when it came out in 1998. Nowadays computer graphics have come a long way, but even still, the graphics are rather impressive, with great mood lighting and cool effects. Think Half-Life, but not quite as advanced. At least it is much more aesthetically pleasing than the first Blood, thank god the sprites are gone in favour of the more realistic 3d models of enemies!

And speaking of enemies... there are plenty fortunately. Although sometimes I began to wish there were a few less to kill, as at times the game's difficulty soars through the roof and not enough enemies will yield health upon slaying them, but that is a minor point. Back to the enemies - there are a wide variety of all sorts of enemy to mutilate in this game, from infantry, to axe-wielding monsters with strange barcodes on their chest, spiked creatures with one eye that jump around and so are immensely hard to kill, to the downright scary monsters of later levels which I cannot begin to describe...

So all in all, a great game with plenty to offer, even multiplayer modes (if you can find someone on the net who is still playing this game online or if you get a LAN party going), and plenty of player customization available. Get it... NOW! 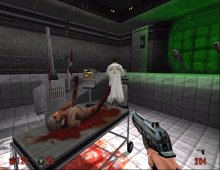 People who downloaded this game have also downloaded:
Blood, System Shock 2, House of the Dead 2, The