Arguably the best game ever made with Ken Silverman's Build 3D engine (the engine behind Duke Nukem 3D games), Blood is an excellent, atmospheric, and highly replayable first-person shooter that distinguishes itself from other DOOM clones with a great (albeit campy) sense of humor, memorable monsters, weapons, and sound effects - and of course a ton of blood.

First, it must be said that if you are offended by excessive gore and violence, don't play this game. True to its name, there is a lot of gore in Blood: fountains of blood spurt from everything you kill, decaying bodies explode in gory chunks when you hit them, and you will often find recognizable body parts and still-breathing humans crucified on walls. This makes the game very "over the top" in the gore department, and intentionally so. The result is that Blood is more silly and funny than scary - a "B-movie" kind of game. But as far as campy games go, Blood is by far one of the best and most entertaining. It makes up for any potential offense with wit and charm - but only if you are willing to lower your sensitivity threshold.

Now that we get the caveat out of the way, let's talk about the game proper. Fortunately, the catchy theme of gory violence is not all that Blood has to offer. While the graphics in Blood is inferior to other DOOM clones (they look too blurry and the palette too dull to me), the environment is wonderfully alive. Thanks to the Build engine, the sheer amount of actions you can do in this game is amazing. You can blow huge parts of the environment up - even destroy an entire train if you want. In addition to plenty of undead monsters, you will meet a number of memorable and funny characters including JoJo the Idiot Boy, as well as original monsters such as mimes. The monsters AI is very good, especially when compared to most other DOOM clones. Blood also has excellent sound effects that more than make up for pixellated graphics: from the zombies' mumbles, to disembodied voices from the past, to your character, Caleb, quoting cool one-liners from Evil Dead and Shakespeare (he beats Duke Nukem 3D quips hands-down in my opinion), sounds add a great atmosphere to the game.

As would be even more evident in Monolith's later games (No One Lives Forever for instance), the level design in Blood is very clever, and is clearly what the designers put a lot of thought on. There are many thin walls you can blow open, rotating rooms, and fun and memorable ?theme? levels (an abandoned ship, the carnival, and a moving train are my favorites). The gameplay is the same "find key X to open door Y to find key Z that opens door A that contains key..." gameplay of most DOOM games, mixed with a fair amount of switch throwing. But the fun level design, the sense of humor in everything, and the number of secrets you can discover make Blood very entertaining and eminently replayable. Equally innovative is the design of weapons and various power-ups. Most of your weapons are very unique, original, and just plain fun to use. While you start the game with a standard-looking pitchfork, you will soon collect an impressive array of cool weapons, including a voodoo doll, a tommy gun, the aerosol can, and the life leech.

Although the game suffered from a lot of bugs in the original release, they are minor bugs that did not detract from the excellent gameplay. Excellent multiplayer support and map/level editor rounds off this excellent game. If you love 3D shooters, can at least tolerate campy humor, and are not offended by 'cheesy' gore and violence, Blood is one of the best games you will ever play.

Blood is the goriest first person shooter game ever made up for the gaming world. You are a gunslinger attempting to help save a woman life that has been destroyed by a mysterious Cabal. In the process you are as well killed and then resurrected. When you a resurrected you are out for revenge on this mysterious Cabal. This game was released in the year of 1997 by GT Interactive Software Corp. For the time that the game was released, it was a very unexpected and welcomed change to the gaming history.

When people are taken out they explode violently, making body parts of the zombie's become weapons. For example you could use a zombie's head like a football. Victims can be found throughout the game lying around after being impaled, and there are many different ways of death just depends on the way they are attacked and where on their body.

You'll battle cultists, gargoyles, zombies, hellhounds, and an unholy host of other terrors in your quest to stop Tchernobog. In turn though you must not only defeat the Cabal--you must scour its dread name from human memory. If that means eradicating everyone and everything the Cabal has ever tainted, so be it. You'll first have to travel through many different places ranging from fortresses to mansions and estates guarded by Tchernobog's servants.

The game has a fully interactive environment, which includes moving floors and running vehicles. You are capable of destructing the landscape and leaving bullet holes for shots you missed. Blood is a game that offers amazing multiplayer game play; tons of weapons to select from, unparallel single player game play, and the visual effects are to die for. This game is as good in single player as it is in multiplayer. No matter what you'll be having a blast blasting this away. If there were any flaws in this game you would not even see them because you'll be easily swept away when your guns start shooting and the bodies start falling around you. This game is definitely a game you will want to have on your PC. If you like bloody shooting games, you'll love this one. 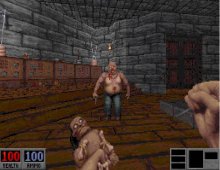