Abe's Oddysee and Abe's Exoddus are two superb first games in Oddworld Inhabitants' uniquely compelling Oddworld series. Similar to Delphone's cross-genre classic Out of this World, the Oddworld games offer a superb blend of action, adventure, and puzzle genres. Set on a unique and thoroughly charming planet, you star Abe, a hapless worker-turned-accidental-hero as he stumbles upon one comspiracy after another. Master Gamer's thorough review says it all about Abe's Exoddus, the superior sequel:

"[The plot, as summarized by MobyGames: After saving his pals from certain doom, Abe is visited by three Mudokan spirits, who tell him that the Glukkons have captured more Mudokons, putting them to work in their mines and factories producing SoulStorm Brew. To make matters worse, the Glukkons are not only forcing live Mudokons to labor away in the mines, they're also disturbing the spirits of dead Mudokons. It's once again up to Abe to save his friends, and help the spirits of the dead rest in peace.]

The basic concept behind the gameplay in Oddworld: Abe's Exoddus is pretty much the same as in Abe's Oddysee, but when the game is this darn fun, I'm not complaining. The developers at Oddworld Inhabitants did not set out to create a completely new and revolutionary adventure in Abe's Exoddus; they just wanted to tweak, update, and improve the original game to make it even better than it already was. And on that level, they have succeeded wonderfully.

The story line, cut scenes, and backgrounds all live up the standards set in Abe's Oddysee, which is quite a feat considering how amazing Abe's Oddysee was in these areas. While the basic premise behind the gameplay is the same, Oddworld Inhabitants did make a number of smaller changes which add up to give the game an extremely polished, balanced feel. You could only possess Sligs in Abe's Oddysee, but Abe's Exoddus lets you possess anything you please: Scrabs, Paramites, even your own farts (no joke). If you wanted to save multiple Mudokons at once in Abe's Oddysee, you had to tediously lead them on one at a time until they were all where you wanted them to be. In Abe's Exoddus, you simply sell "All ya!" to get everybody's attention and they will all follow your orders at once (they will even follow your lead and sneak past sleeping Sligs and Slogs).

Speaking of the Mudokons, their presence in the game is greatly enhanced by a brilliant new feature called Game Emotion. The Mudokons in Abe's Oddysee always seemed to be in the same mood and always did what Abe told them to do (with the sole exception being Mudokons who were afraid to jump off platforms). In Abe's Exoddus, angry Mudokons will defiantly and firmly say "No" to everything you ask them to do until you apologize to them for whatever it is you did to upset them. Depressed Mudokons will just stand there feeling sorry for themselves until you comfort them. Mudokons who are high will stumble around laughing and tripping over their own legs until you slap them across the face and snap them out of it. Drunk Mudokons will respond to everything you say with the same sad whimper. Blind Mudokons have to be led carefully from place to place. And if a Mudokon gets really pissed off for one reason or another, he may try to pick fights with other Mudokons and they will eventually kill each other unless you say "Stop it!" The Mudokons are no longer mindless drones who do whatever you tell them to do; instead, they act and feel like real living beings. This makes you care about them a lot more, and thus care about the game a lot more." You will care about the game so much, in fact, that you will be sorry to see it end. Definitely one of the most underrated games of all time.

Oddworld Abe's Exoddus, is the compelling and imaginative sequel to the original Abe's odyssey. You take on the role of an outcast, escapee from the prison of oddworld as you work your way through the game freeing your own kind, transforming into baddies such as hogs and flying hogs and even rolling around in huge metal spheres.

This game is a puzzling platform wizard with many tricks and turns, it can become very frustrating at times due to the complexity of some of the tasks and the disobeying kind of abe. The opening scene gives the impression that the game is pretty must the same as the first and yet after the first glance and a few levels in you begin to realise the improved gameplay and smoother controlling of abe himself, thought this does not at any point take away any of the difficulty of the game itself, your best bet is, if in trouble to run, and run fast to the nearest door and get through it before being shot by a hog or fried by a laser beam.

The Mudukons which abe is, are being overrun and taken over by the glukkon race which are empowering and evil compare to the light-hearted and easy going, friendly mudukos, therefore grave danger is likely for the continuing of the mudukon race if they do not act fast, and as you learn only you, as abe, is able to complete the task of saving his kind!

As the game progresses it becomes less frustrating and ever more difficult as each set of levels becomes more difficult to understand and find a way out and on to the next. There are many hints throughout the game such as falling pebbles to tell you where you can climb etc and as you progress you can read these more often than not, instantly, which in a heated pursuit with a slig isn't half handy as I would reckon four out of five times being spotted will result in you being shot, this maybe due to me being quite poor at the game though.

Overall the game is an extremely enjoyable play whilst at times being very difficult and frustrating but also giving a fell of reward at the completion of a world after much trial and error in finding the way to escape the glukkon clutches. I definitely give this game a very high rating and it is one of the most diverse games you will ever play, 8/10 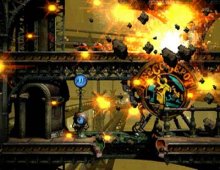