Out of This World (a.k.a. Another World)

One of the most innovative games in any genre, Out of This World (a.k.a. Another World in Europe) is Eric Chahi's breakthrough game that masterfully combines action, adventure, and artistic cinematography in ways the PC gaming world has never seen.

You will sense that Out of This World is something special right from the start, even before the game proper begins. The introductory sequence reveals that you are Lester, a young physics professor who suddenly finds himself in a strange alien world after a lightning bolt struck the gigantic particle accelerator he was experimenting with. This sequence has one of the best use of camera angles I've ever seen in games—you'll see various cinematographic touches (e.g. Lester walking toward the camera, which then zooms to his back) that are common to movies but rarely seen on the computer.

The game's style and technology are worth mentioning, before I get to the gameplay. Instead of bitmapped or digitized graphics that was all the rage in the early 1990s, designer Eric Chahi instead opted for primitive-looking polygonal graphics to represent the characters... and what an excellent move it was. Polygonal graphics allow for very smooth, realistic character animations that would be impossible to do with digitized graphics (and remember: this was before the age of 3D accelerators). Even die-hard fans of Prince of Persia will admit that Lester moves much more smoothly and realistically than their favorite Arabian prince.

As for the game itself, Out of This World is ostentatiously a platform game—but turns out to be a lot more. The controls are very easy to learn: only the cursor keys and spacebar are used. Although much of the game involves killing menacing aliens, whether by kicking or shooting once you find a gun, what sets Out of This World apart from other action games is that wit and astute observation are also equally important. Simple trigger-happy behavior won't help you pass the alien species of saber-tooth tiger, nor will it help you escape from prison. In later levels, you will also need help from an alien friend, fellow inmate who escaped with you. Since you can't control his actions but can only observe what he does, planning and timing are critical.

In every respect, Out of This World is a masterpiece. The only gripe I have is that you can only save at predetermined points throughout the game, similar to console games. Since the later stages are very difficult and save points are few and far between, this means you will have to replay them over and over until you get it right. Regardless, this is one game you will want to persevere to see the ending. I spent countless hours with the game, gritting my teeth all the way through, but I was sorry to see it end. Also, as a side note, the ending music theme is among the best music I've ever heard in any game, although the ending sequence is disappointingly short. Overall, a classic game that defies the action genre—so much so that I insist on calling it an "adventure" game. With excellent plot, atmosphere, and ingenious survival-for-the-fittest physical puzzles that fit perfectly with the game world, Out of This World is an action adventure the likes of which none has ever seen. An absolute must-have, and a much superior game to spiritual sequels Flashback and Fade to Black.

Ahh Another World, now this takes me back. Like the original Prince of Persia before it and the classic Flashback that followed after, Another World was one of the first games to truly succeed in merging polygon graphics (which back in early nineties we all believed to be amazing, the panicle of what we could achieve with computer graphics, if you look at some of the stuff now how naďve we all were) with addictive game play to create a truly cinematic experience. Of the three games I mentioned Another World was always my favourite and the one I remember most fondly.

I must have played it around ninety-three or ninety-four back on the Amiga 600 with a converter program (after all the game was originally released for and made on the Amiga 500, backwards compatibility was a real choir back in the day). According to Wikipedia the game was ported to other platforms but if memory serves none of these save the DOS and possibly Atari ST versions saw a release here in the UK. Another World has you take the role of a human scientist who has somehow managed to get himself transported to, you guessed it, Another World! Like any right thinking member of our species thrust thou space on to an alien planet he follows the first rule of diplomacy and makes sure to arm himself with the nearest available weapon, in this instance a nifty laser gun that's a lot cooler than it is useful. From then on you travel from screen to screen (no side scrolling here kids) avoiding traps, shooting these big black beastie things (think the zombie dogs in Resident Evil were bad wait till you meet these buggers) and avoiding death at the hands of some miffed off aliens.

The real turning point in the game is about have way thou when you get captured by some of the locals. In one of the first truly cinematic cut scenes of its day you meet an unnamed alien, your cellmate, who becomes your fiend and ally. That you can't understand each other's language is made clear by the fact that there's no dialogue, ether written or spoken, thou out the game. The animation manages to get everything across thou the use of movement such as simple gestures. You and your new buddy manage to escape working as slaves in an underground mine and from their travel together around the planet searching for a way to get you back home. You eventually end up in an exotic palace for the final level after crashing thou the skylight of a bath house with an alien spacecraft (in which you get treated to soft-core polygon nudity, the first of it's kind). And then you're treated to the biggest twist of all, an ending that will leave you pondering what will happen next for years to come!

Well not really but back in the early nineties it was very ahead of it's time and not the sort of thing you expected from a computer game. Another World hasn't aged brilliantly; it was seen as being slow and frustrating a couple of years after it was first realized so now, well over a decade later, it's almost painful to sit thou. But to its credit Another World does have ambition on its side. The developers have gone out of their way to input as much detail as possible into the screens. Characters and creatures move in as naturalistic way as the technology at the time could let them. And the music, combined with the sparse backdrop art (lot's of greys, purples, blacks and blues) does make for an atmospheric experience.

Another World is a must for anyone with a taste for retro gaming. Its cult status is justly deserved as seventeen years on from it's original release, you speak to almost anyone who ever played it, they'll regale you with story's of there time on Another World. 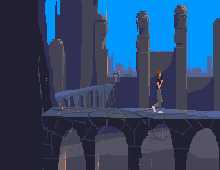 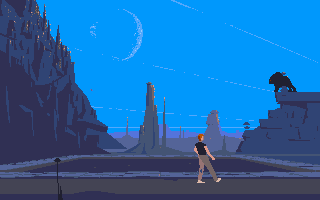 Out of This World (a.k.a. Another World) screenshots