The year is 2142. The planet is Titan... Playing the role of Conrad B. Hart, a confused young man with a memory loss, you must escape your enemies and find your missing girlfriend. Flashback is chock full of slick animations, superb sounds and tons of atmosphere. It's a near perfect blend of action and adventure, leaving almost nothing to be desired.

Flashback is a fun action adventure game that will please joystick experts and adventure gamers alike. Playing the role of Conrad B. Hart, a confused young man whose memory was wiped by the alien Morphs who caught him eavesdropping on their plan to conquer Earth. Your goal, of course, is to escape the from the grasp of the mutants and save earth from an untimely destruction.

As with its spiritual predecessor Out of This World, Flashback features life-like animations, well-crafted cinematic cutscenes, and tons of atmosphere. But despite better graphics and longer levels, Flashback isn't quite as fun as Out of This World in several ways. For starters, the "puzzles" are somewhat repetitive, as most of them focus on getting Conrad from one point to another by pressing a button or throwing switches. Although there are objects you can pick up and store in your inventory, most of their uses are so obvious that adventure gamers won't even consider them "puzzle" at all. Furthermore, the game inherits Out of This World's save-only-at-save-point feature, but it is more frustrating this time around because most levels are much larger and more difficult. This means that if you die, you might have to spend hours retracing your steps, all the time hoping that you'd get to a new save point before the health meter goes to zero. Although this "realism" may appeal to some gamers, most of us who are not joystick gods will find it very irritating.

Fortunately, Flashback's excellent storyline and great level design makes its weaknesses seem trivial, and makes the game worthwhile to perservere. Every new level introduces new challenges, dangers, and objects to manipulate and use. It's more derivative than innovative, but it's still one of the best action adventures you'll ever play.

Platform game. You're dropped on a planet and have to save your girlfriend. The animations are very good and remind me of Prince of Persia. 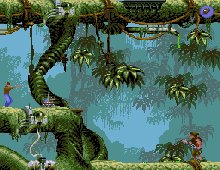 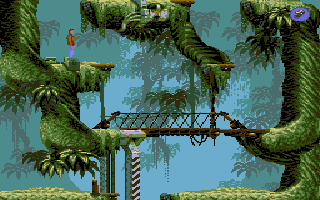 People who downloaded this game have also downloaded:
Out of This World (a.k.a. Another World), Fade to Black, Maniac Mansion Deluxe, Gobliiins, Darkseed