Fade to Black is a disappointing sequel to Delphine's excellent Flashback the Quest for Identity. Although it has all the makings of a great game, the constantly shifting camera angles and awkward interface make the game too frustrating for all but the most experienced action gamers.

Anyone who has played Flashback will be familiar with the gameplay of Fade to Black. Resuming the role of Conrad Hart, your task is once again to stop the alien Morphs from taking over the Earth. You will shoot any aliens in sight whole solving a few puzzles to gain access to new areas to gain access to even more difficult levels.

Unfortunately, the game's promising start and impressive 3D polygonal graphics quickly get bogged down with obtrusive camera angles that become annoying as soon as the initial "wow" factor wears off. Fade to Black uses a moving camera technique that was supposed to follow the action from the best possible angle. However, "best" in this case is very subjective indeed: after seeing Conrad die a lot from some unseen blows that camera wouldn't show you, you'll begin to wonder if the camera isn't being control by the Morphs themselves who want Conrad to suffer endless deaths. Since there is no way to toggle this "intelligent" camera off, all you can do is grit your teeth, restore, and move on. Even more frustrating are the controls, which require much too many keystrokes, especially considering that the moves you can make are limited to looking around corners, running, and shooting. Anyone familiar with the intuitive interface of Doom will have much to get used to here.

Despite quirky camera angles and awkward controls, however, Fade to Black still packs enough good story, great atmosphere, and some creative physical puzzles to keep you glued to the end. Its flaws make it difficult to become completely immersed in the game, but those who persevere will truly enjoy the experience. Recommended, but definitely NOT for anyone who's not a joystick expert-- this is much, much more action-intensive than Flashback. 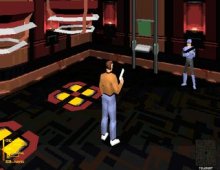 People who downloaded this game have also downloaded:
Flashback, Out of This World (a.k.a. Another World), Darkseed 2, Little Big Adventure 2 (a.k.a. Twinsen's Odyssey), Darkseed