Darkseed isn't a scary game for nothing, the graphics were made by H.R. Giger, nobody less then the maker of "Alien: the eighth passenger". It all starts when Mike Dawson, (nothing to do with Dawsonīs Creek, really!) one of the designers of Cyberdreams software company, wishes to buy a camp house for taking some days off and writing science fiction books. He found a really cheap mansion in a small city called Woodland hills, but something happens on your first night in the new house: Mike has nightmares, and dreams about something being implanted inside his brain. Next morning he wakes up with a big headache. Now he has three days to solve this mystery before.... uh oh... well, I think you wouldn't like to know that.

One of the most unique adventure games around when it was published in 1992. The graphics in the game are based on drawings made by a horror designer. Cyberdreams have succeded in creating a gloomy environment in the game where you have the constant feeling that something about to happen.

You play as Mike Dawson who has just moved to a new town. You wake up to find out that someone have put something into your mind and the time is now against you. Will you be able to get rid of it before it's too late?

One of the most memorable (and few) science fiction- horror games ever released, Dark Seed is an interesting horror/scifi story based on the haunting artwork of H.R. Giger, creator of Aliens. As writer Mike Dawson, you must travel in both the human and alien dimensions to thwart the aliens' evil plans. Interesting premise and outstanding graphics make for an interesting game that unfortunately gets bogged down with too many illogical (and timed) puzzles. A good first effort from Cyberdreams, and *much* better than its horrible successor Dark Seed 2. 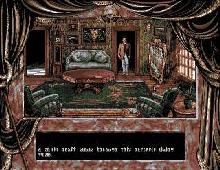