One of the most unique adventure games around when it was published in 1995. The whole game continues from Darkseed 1 and yet again you (Mike Dawson) are in trouble. The graphics in the game are based on drawings made by "H.R Giger" who is a horror designer. Remember the Alien films? He designed the sets and Aliens.

Cyberdreams have succeded in creating a gloomy environment in the game where you have the constant feeling that something about to happen. You wander around in your home town where you will have to find different tracks before you can enter the "dark world" to solve the mysterious of why you feel so weird.

A "more of the same" sequel to Cyberdreams' atmospheric Dark Seed, Dark Seed II features better graphics and more stunning, nightmarish artwork from Alien designer H.R. Giger, but a much less interesting plot and more banal puzzles than its predecessor.

One year after events chronicled in Dark Seed, Mike Dawson is back, still suffering from headaches and nightmares. He returns to his hometown to recuperate, only to find that he's a prime suspect of murdering Rita Scanlon, his ex-girlfriend. The problem for Mike, naturally, is that he cannot remember what happened on that night.. the night that he may have been the last person to see Rita alive.

Anyone who has played Dark Seed will be familiar with what happens next: you must travel once more through the portal that links your world to the nightmarish Dark World to confront your old enemies, the evil 'Ancients,' who are busy hatching the Behemoth that will soon be able to cross over to destroy Mike's world. As in Dark Seed, Giger's 'biomechanical' artwork is used to contrast the bleak, alien Dark World with the mundane realities of Mike's hometown. With SVGA palette this time around, the effect is even more striking and truly brings Giger's fantastic visions to life. Unfortunately, they are used merely as static background pictures that quickly lose the "wow" appeal after you see it several times.

What makes Dark Seed II a more inferior game than its predecessor is the severely linear gameplay that makes puzzle-solving a frustrating affair. You will often not be able to pick up an item you *know* you need, simply because the egghead Mike Dawson hasn't talked to enough people, or done something else that would make make the item's use painfully obvious. Similarly, you cannot go to many locations until you have performed all the correct sequences-- even though the relationship between those actions and the locations is unclear. This extreme linearity is all the more frustrating because, in contrast to Dark Seed, there is no clock ticking away in the background that signal your progress. Fortunately, most puzzles are quite mundane and even boring, and simply involve a lot of travelling between the two worlds. The designers even throw in one dreadful maze, although you only need to navigate it twice in the entire game.

In conclusion, I find Dark Seed II a step backward from its predecessor. The plot, which starts out promising enough, quickly degenerates into another boring save-the-world-from-alien plot, thus never achieves the same spine-tingling, look-behind-your-back effect that the first game does as a psychological thriller. Giger's artwork, while characteristically horrific and fascinating, is merely a static backdrop that never truly comes alive. 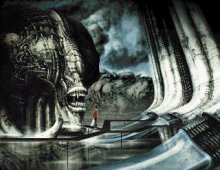