Doubtless one of the very best "serious" adventure games ever made. In this psychological rollercoaster ride, you find yourself a patient in a strange sanitarium, with no memory of who you are. Slowly but surely, as the game progresses, you gather clues and insights into the past that give you the whole picture. I don't want to ruin your enjoyment of the game, but in general, each new chapter represents another step in Max's search for his sanity. A true classic, and must-have for every adventure gamer, especially fans of psychological thrillers.

Sanitarium is a psychological thriller style of adventure game that was released in the late nineties. It was developed by DreamForge Entertainment and published by ASC Games for Microsoft Windows. It is a single player game that is recommended, according to its ESRB rating, for teenagers. The game was somewhat reworked and re-released in 2002 for XP, but the game here is the original horror game. It is a point and click style of adventure game.

The game plays out from the top down or bird's eye perspective. It surrounds the life of Max Laughton who has the classic amnesia that we so often find in adventure games. He knows he was in a car accident and now must learn his identity and other details of his life if he ever wants to escape the medieval asylum he has been institutionalized within in order to attain "help." He has to explore the grounds of the sanitarium, but will also have adventures within his own mind, delving into his own flashbacks, delusions and snippets of memory. From the subject matter, it is easy to see how Sanitarium developed a reputation for its atmosphere and dark mood. The overall theme and feel of the game are both further enhanced by some somber music that plays throughout the course of the game.

Probably the most unique thing about Sanitarium is the setting…not so much the asylum, but Max's subconscious. It does a great job of portraying paranoia in Max's quest for truth. Similar to what Max would be feeling, the user never really knows if he is exploring "reality" or something within Max's mind. There is no real such thing as dying in the game, since a "death" will result in Max being transported back to the beginning of the chapter he has begun. Max will have to mainly solve puzzles in order to progress through the world. He will also speak to and interact with many nonplaying characters, again with the user not knowing if they are actual inhabitants or associates of the asylum or part of Max's imagination. Regardless, Max will have choices on how to respond to each person he meets, and different events will be unlocked based on the subjects he converses with the characters about.

There is a lot of weird trivia surrounding Sanitarium. For example, when Max looks at the headstones in the cemetery, he is unaware that he is reading the names of the game developers. Also, while many adventure games feature red herrings…luring the user off into lala land…Sanitarium contains three actual red herrings. The user will find big red fish in an area to signify that he has been led astray.

This is a good one from start to finish. The mood is there, the game play is there, the logic exists…such as it is. It needs to be experienced to understand it. 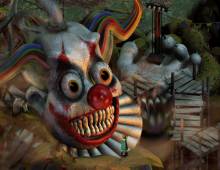