Lost Files of Sherlock Holmes 2 (a.k.a. Case of Rose Tattoo)

Arguably the best games starring the world's most famous fictional detective, Lost Files of Sherlock Holmes 1 and 2 are similar: while the plot, writing, graphics, are all first-rate, most puzzles-- especially the just-click-and-watch lab sequences in Serrated Scalpel-- "lead" you to their solutions without requiring much thought. Fortunately the sequel Rose Tattoo boasts better puzzles and graphics, and a much longer plot. Holmes' fans will enjoy untangling both the Jack-the-Ripper-lookalike mystery, and the Diogenes Club bombing in which Holme's brother, Mycroft, is mortally wounded. Despite banal puzzles that hardly merits the attention of the world's foremost detective, the games' well-written plot and faitthful recreation of Holmesian London make the games worthwhile. So come, Watson, the game's afoot!

Elementary, my dear Watson? Not even close. If you have a few dozen hours to kill, check out Electronic Arts' Case of the Rose Tattoo from the Lost Files of Sherlock Holmes series. While figuring out the mystery actually is elementary, solving the case isn't so easy. Sherlock Holmes' brother is injured in a strange explosion during a social function at the Diogenes Club. Was it faulty gas pipes or foul play? That's the question.

Despite the hours the game takes to solve, you're not likely to get bored too easily. The game makes great, subtle use of video and graphics, and gives you plenty of characters to interact with and interrogate. The down side to all of this is that the game is strictly linear. In order to move along in your investigation, you have to get the right questions answered, and uncover the right clues, in the right order. Unfortunately, that means clicking on things until your finger goes numb. For a large part of the game, the only deductive reasoning you need is figuring out what object you haven't clicked on yet, which doesn't take skill or brains, only patience. Luckily, when you get stuck, an included hint book is around to give you enlightenment.

Depending on how you look at it, the linear nature of the game is a bit of a mixed blessing. There are so many places to go, and so many people to question, it would probably be too overwhelming were you given the power to go anywhere you wanted. There's a handful of puzzles along the way, including a chemistry set you use to analyze clues, as well as a game of darts. While the game doesn't really require a whole lot of brilliant detective work, it's still entertaining to watch the story unfold as you click along. If you're looking for unpredictable twists and turns, this game probably won't deliver. But if you're in the mood to use a little brain power and watch a fascinating mystery from the eyes of a master detective, this is the game for you. 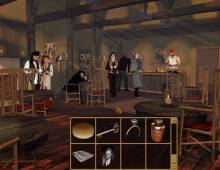