Jack the Ripper is arguably the ultimate detective game. Based on the sensational Jack the Ripper murders in 19th century London, your job is to deduce the killer's identity before he strikes again. Gameplay consists of highlighting text obtained by interrogation or search to record them as clues (or "premises" in the game's lingo) in your notebook. Then you must combine these premises logically to derive the solution. This novel method makes for a mostly static and "dry" game consisting of reams of text, but patient Sherlock Holmes fans who cherish abstract deduction will find this an ideal game to follow in Holme's footsteps.

Probably one of the best investigation games ever. As the title suggests, Jack the Ripper puts you in the unfittingly pants of the detective who has to unravel the mysteries behind the savage murders that plagued London at the beginning of the nineteenth century. Your goal is to collect all possible clues -this includes searching crime scenes and interrogating witnesses and suspects- and then tie the clues together to obtain a conclusion. Clues are called 'premises' in the game and are all collected in your trusty notebook: when you go to your study you have the possibility of selecting two premises, and if you pick the correct ones your character will add a "conclusion"… the more conclusions, the closer you get to the culprit.

One thing is for sure: the game is very, very hard. Not only you don't know when the clues you gather will be enough to gain some conclusions, but the places you visit are also filled with "wrong" clues. Moreover, you must learn to think as the programmers of the game, beacause it will often happen to you to find two clues apparently work together perfectly, but they just can't be tied up to make a conclusion.

Graphic is pretty old but adequate, the game itself is after all just a bunch of clicking around the screen (forget stuff like in Cruise for a Corpse). The atmosphere of the foggy London is remarkably portrayed anyway. At any rate, Jack the Ripper is probably the most challenging game of its kind that you'll find out there. If you are a fan of this genre then Jack the Ripper is probably a very good choice, but if you don't like mindbreaking enigmas then you'll probably get frustrated very soon.

The game has been tested under Windows XP and works fine, however you must tweak the memory setting before launching: just right click on the .exe file, then on 'properties' and in the properties menu click on 'memory'. From there change all options to "automatic" and save… the game should work. Note that if the game doesn't work after this, I am sorry but I really don't know what else you can do about it.

As you probably will know the story about Jack the Ripper, the mysterious murderer in London, I won't get into that. But the only way to experience this game is by playing it.

Its story is really similar to the legend of Jack the Ripper and that makes this game a historical adventure. You're the detective and you will have to solve the Jack the Ripper mystery.

The best thing about this game is that you're really a detective, you will have to gather pieces of evidence and time also plays a very important role in this game. There are travel times and more, which makes you want to think alot about what could have happened, so that you don't need to travel too much.

The murders are commited while playing the game, so you will have to keep your eyes and ears open and if you do, this could be the best adventure game you've ever played! 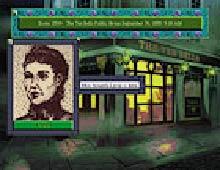