Metal Gear Solid is a solid PC conversion of a hit Playstation game, in itself a hugely popular console series designed by Hideo Kojima. GameSpy's comprehensive review of this "definitive" version to own says it all about one of the best cross-genre thrillers on PC:

"A nuclear weapons disposal facility located in Alaska has been attacked and captured by ex-members of FOXHOUND, a Special Forces unit designed to deal with counter-terrorism. These former-allies turned terrorists are making outrageous demands to the governments of the world, and should these demands not be met in 24 hours, they will launch a nuke and begin to destroy the planet. Our hero and former member of FOXHOUND, Solid Snake, is wrangled back into action by the Roy Campbell--the retired FOXHOUND commander--and is sent to Alaska to infiltrate the base and stop the terrorists from launching the nuke. There are one or two tricky obstacles thrown into the mix, such as Meryl Silverburgh--the commander's niece, two other important government hostages, and the ominous Metal Gear Rex--a huge robot-style weapon with nuclear launching capabilities --for Snake to overcome. This only marks the beginning of the fun as a vast story of power, betrayal, and espionage unfold as you play.

Controlling Snake on his adventures is a very unique experience. He'll encounter many different characters, have access to insane hardware and equipment, and most importantly, he'll have to act like a spy--dodging guards, avoiding cameras, using stealth, and hiding in shadows. You can take a more direct approach to tackling the puzzles and battling the bosses and enemies if you like, but more often than not, you'll really need to plan out your strategies if you want to live more than 2 minutes.

Snake has a bunch of basic moves and attacks until he starts to progress and pick up weapons. He can crawl along the ground, hug walls, knock on solid surfaces causing aural distractions, and even grab and choke individuals then drag them around using them as human shields! Everything and more that you would expect from a decent, hardworking spy. Weaponry and equipment give Snake even more options of disposing of enemies, and with incredible attention to real life weapon models, physics, and functionality, Metal Gear Solid allows you to really submerge yourself into the character and storyline. Some of the equipment includes stuff like cigarettes. Snake's health even goes down when he uses them, but they allow him to detect infrared alarm beams etc. making them useful in certain circumstances. He'll find night vision goggles, cardboard boxes (which can be used a stationary cover to avoid detection by guards and cameras), security key cards, rations, and even a bottle of ketchup which will all aid him throughout the game.

The array of weaponry is pretty stunning and includes silenced pistols with laser sights, FAMAS assault rifles, sniper rifles, remote controlled missiles, and C4. It's even possible to sneak up behind someone and stick a lump of C4 on their back then back away and detonate it! Great stuff indeed.

One of coolest gameplay features is the radar located in the top right corner of the screen. It shows the visual fields of cameras, enemies, and Snake as well. By using this, you'll be able to sneak up behind people like a pro. Again, attention to detail means that if a lazy guard decides to yawn and stretch, his vision closes with his eyes for a short amount of time. Run on past, or watch him take a little nap on the job. Either way, you'll be able to get behind him and snap his neck like a twig! Overall, the gameplay remains identical to that found in the PlayStation version, and that's just the way it should be.

The PC version is actually based on the Japanese PlayStation re-release called Metal Gear Solid: Integral. The difference over the US PlayStation release includes over 300 brand new VR Training missions. Completing all of them is a massively enjoyable undertaking that will tax even the stealthiest of would-be Snakes. A first-person play mode, and many more little extras like the "Photo Shoot" mode allows you get up close and personal with some of the more sexy female members of the cast!

All in all, this is the definitive version of Metal Gear Solid and it's only available on the PC. Go tell your console owning buddies and watch 'em cringe. If you enjoy playing games and haven't already played it on the PlayStation, then Metal Gear Solid is a fantastic title to own. Even if you have played through it once, it looks so much better on the PC that it's certainly worth playing all over again. The extra VR missions will give you several added hours of enjoyment outta this one. The only downside to the proceedings is that some may feel it's a little bit on the late side. Go get 'em Snake!"

Metal Gear Solid is one of the best classics I've ever played. It's been 7 years since I've played this game and when I played it yesterday my wife was begging me to come off the PC. When I first saw this game 7 years ago I realized this game was an instant classic. Well enough about my life and more about the sneaky Solid Snake (which is the main character of the game).

Solid Snake is an expert in covert ops, infiltration, armed and unarmed combat. Just the person you don't want to be messing with. The controls that you use in this game are just absolutely awesome. Running, Walking, Jumping, Crouching, Hiding in boxes. And yes of course shooting. MGS, unlike most action games does not revolve around shooting. It's more about stealth and how well you can hide the dead body. When Konami had made this game about 7 years ago it featured amazing graphics for that time. It also featured very accurate and realistic sounds such as knocking on walls to get guards attention. Every MGS game that has been made till now couldn't have been created without the first. The Story in this game was quite interesting and this game was equipped with alternate endings and twists in the plot. MGS is also accompanied with excellent camera angles that add to the intensity of the game. There are also bonus features which allow you to use your powers to a whole new level. Yes now you're probably thinking what can't you do in this game?

The Story which is quite interesting revolves around a group of terrorists who have stolen a government weapon called Metal Gear. Around the game, you will find interesting pick-ups like ammunition, health packs and- yes even new weapons. In MGS there are many ways you can kill your enemy, that part of the game play ensures that the game does not become repetitive.

My final words are "try this game". It features a unique cast of characters, exciting story line that will leave you at the edge of your seats, demonic weapons that create havoc, the chance to play a bionic ninja dude that could run circles around you while killing you in 20 different ways. My vote for this game is 9.5/10 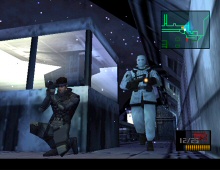