Metal Gear for PC is a good conversion of the NES game of the same name, which is in turn based on a MSX blockbuster (MSX was an early console system that no longer exists). This is the one that started it all. You are "Solid Snake," a veteran commando whose mission is to infiltrate an enemy base in order to destroy "Metal Gear," the world's ultimate super weapon.

Metal Gear plays like no other shooter. Instead of shooting everything in sight, you must learn to sneak around and evade stronger enemies or you will get caught. You must also free any captive you find. Freeing enough captives, and your "vital sign" (i.e. health bar) as well as your rank will increase. Get the hostage killed, and you'll immediately be demoted. This adds a fun element of planning to the game.

The game's graphics are excellent for its time, and the interface is intuitive. The original MSX version, however, had a better story and even better beginning scene-- a cool sewer entrance as supposed to a lackluster air raid. Overall, this is a great game, but inferior to the MSX original. My recommendation: play this game, then play the MSX version on an emulator to see how different they are. This PC version is still much better than most action games of its time, but playing the MSX version is necessary to understand why this series is still going strong. If you like the game, check out the superior sequel Metal Gear 2: Solid Snake on this site. 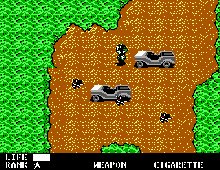 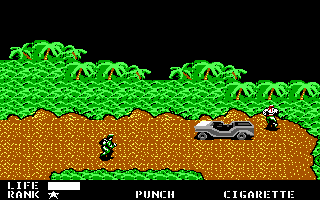