Metal Gear 2: Solid Snake is a little-known release in Konami's popular Metal Gear series, because it was released only in Japan for Konami's MSX2 computer. It's not until the release of MSX2 emulator for PC and fanmade English translation patch in 1997 that PC gamers have a chance to experience this excellent game that is virtually unknown outside Japan.

The game picks up more or less where the original Metal Gear left off. A small nation known as Zanzibar Land has stolen nuclear weapons from developed nations and kidnapped Dr. Kio Marv, a scientist who invented "OILIX," a specimen known to rectify high-quality oil. As one-man commando, you must sneak into the Zanzibar Land fortress and rescue Dr. Marv to bring OILIX back into the right hands.

Metal Gear 2 improves on the original in every way possible. The graphics is more detailed, the soundtrack and sound effects much improved, and numerous gameplay enhancements added. Although it may look at first like a typical beat-em up game like Alien Breed, Metal Gear 2 goes above and beyond the confines of "action" genre to truly qualify its claim of being a "tactical simulation." Sure, you'll still need to kill countless guards (or sneak past them, thanks to the new crouch/crawl ability), but you'll need as much wits as reflexes to succeed. The game integrates adventure-style puzzles very seamlessly into the action, and these provide subtle alternatives to shoot-to-kill strategy. For example, you can use rations to lure pigeons, use tape recordings to fool guards, and pay close attention to radar and radio calls. Even more than Metal Gear, the intricate and compelling story that unfolds (usually by radio, but also during the action) will keep you hooked.

Make no mistake, about it: Metal Gear 2 is not an easy game. In fact, if you're as bad as action games as I am, you will die a lot. I still haven't finished the game, and I doubt I ever will since I can't see how I'll ever beat the second "boss" enemy. But the fact that this game has me reload countless times must say something about its addictiveness. If you consider yourself an action expert, you'll find Metal Gear 2 a good challenge.

The bottom line is easy: Solid Snake is a superb game. If you are a Metal Gear fan, this is the game that Snake's Revenge should have been. If you like MicroProse's Airborne Ranger, you'll love this MSX2 old game - it's got better action, more sophisticated gameplay, and a wonderful plot. If you love the recent Metal Gear Solid games, you might be surprised at how this MSX2 predecessor is just every bit as good - and in this reviewer's humble opinion, even better.

Note: This download already includes the fMSX MSX2 emulator for DOS, with a convenient batch file that will automatically launch the game file. If it doesn't work (probably because you have WinXP or other versions that have no DOS support, you'll need to download an emulator for Windows and use it to open the SOLIDE12.ROM game file. I recommend RuMSX emulator. 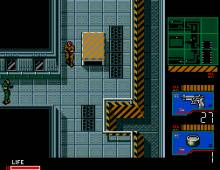 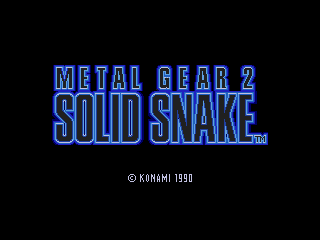 People who downloaded this game have also downloaded:
Metal Gear, Metal Gear Solid, Prince of Persia 2: The Shadow and the Flame, Zelda Classic