"Fans of the previous Carnivores games will be immediately at home in what looks to be the last of the series (developer Action Forms Ltd is moving on to Duke Nukem: Endangered Species). And an appropriate end to the series it is, bringing armchair hunters face-to-snout with the ancestors of the tigers, bears, birds, wolves and elephants long available in hunting titles set on present- day Earth. For those unfamiliar with the Carnivores backstory: The year is 2190 AD and the DinoHunt Corporation is offering safaris to a place called FMM UV- 32, more commonly known as the "Dinosaur Planet." Graced with breathable air, FMM UV-32 is also crawling with what look exactly like Earth's long-extinct reptiles.

The only major change in gameplay offered by Carnivores: Ice Age, other than mammals rather than reptiles for trophies, is the welcome addition of the Supply Ship option. Run out of ammo in mid-hunt? No longer a problem. Pressing "S" brings the Supply Ship to drop a full pack of ammo for every weapon you've chosen to bring on the expedition. But don't get sloppy. The Supply Ship will only show up once per hunt.

Like previous entries in the series, Carnivores: Ice Age requires that hunters earn the right to go after specific trophies. Once you've agreed to the DinoHunt Corp Personal Injury Waiver (a witty series tradition), you enter your name and discover that you have only enough credit to buy the right to hunt a large non-dangerous animal in one location with a 9MM pistol. As you bag more trophies, though, you earn points toward different venues, bigger and more aggressive prey and a more varied selection of weapons. There are also additional pieces of equipment, such as camouflage, radar, cover scent, double the usual serving of ammo and the previously mentioned Supply Ship option. While none of these items cost anything out-of- pocket, each reduces the point value of any trophies bagged. Hit the field with all the equipment available and, though the hunting will be easier, it'll take a long time to work up to a shot at the most expensive trophy of all, the yeti.

Five lushly realized environments can be explored in the soft light of dawn, the harsh glare of midday or, for the particularly adventurous, the eerie green of nightvision. If you want to get a sense of the venue and its critters before you commit to a hunt, you can choose Observer mode. This gives you a map and a pair of binoculars, but no weapons. While most of your potential trophies will ignore you, don't think you've suddenly become invisible. If you make enough noise or get close enough to attract the attention of something hungry, you'd better hope that the four seconds it takes DinoHunt Corp to get you off the planet is enough.

Carnivores: Ice Age adds a subtle polish to what has been a solid series. For the first time, there is music over the main menus. Move your mouse pointer from right to left and you'll notice the music moves as well. Climb the tower in the Ravaren's Bridge location and you'll find you can jump off the bridge into the water. You won't make a splash, but it's still more immersive than not being able to jump off a similar bridge in the Channelwood world of realMYST. Along with ice, there is snow: individual flakes slowly melting on trees, ground and water. (If you've a mind to, you can look up from the bottom of any body of water and see the flakes melting as they strike the surface.) Finally, the sniper rifle reticle has gone tech. No longer a black crosshair at the end of a tube, it is now a green cross on a telephoto image.

The world of Carnivores: Ice Age, like the world of Carnivores 2, is sufficiently realistic to make just wandering around in it a pleasure. You see a shadow on the ground, look up and catch a glimpse of an archaeopteryx wheeling slowly overhead. You surprise one of the many harmless striped pigs and watch it waddle off into the brush. You explore some of the locations at dawn and the combination of light, shadow and clouds edges toward real beauty. If this is the end of the series, it's an impressive finale. 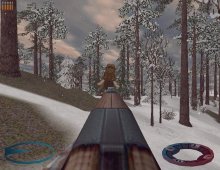 People who downloaded this game have also downloaded:
Carnivores 2, Blood 2: The Chosen, Blood, House of the Dead 2, The, Freespace 2