Undoubtedly one of the best 3D space combat games ever made, Freespace 2 by Volition is a superb space opera of epic proportions. The strong emphasis on plot development combined with spectacular graphics and story-based missions make Freespace 2 a worthy contender to Origin's more well-known Wing Commander games. In fact, in my humble opinion the fun factor of Freespace 2 far surpasses that of Prophecy Gold, the last Wing Commander game, by a considerable margin.

The game begins with an alliance of humans and alien Vasudans attempting to rebuild their armies 32 years after the end of 'The Great War,' the battles of which were the subject of Freespace. You play a member of the GTVA, a Human-Vasudan alliance which is fighting a group of human rebels who call themselves the NTF.

Freespace 2 improves upon the excellent Freespace in every respect. Pre-mission elements such as the briefing session and ship configuration are superbly presented, with a lot of details and options to choose from. Frequent cutscenes made with rendered graphics are captivating, especially because outstanding voice acting makes them as absorbing to watch as real-life actors in Origin's Wing Commander IV (the cutscenes, except for the endings, are unfortunately missing in this CD-rip, but fortunately they are not necessary to your knowledge of the plot, since you can tell how the storyline is unfolding during briefing and de-briefing scenes). The game's emphasis on the plot is not just window-dressing, either: as in Wing Commander, your choices as well as mission successes and failures determine how the plot will develop, and ultimately what ending you will see. Even during the missions themselves, your objectives may suddenly change when new backstory-related developments take place. Being able to think "at the seat of the pants" to quickly adapt to changing circumstances is the key to winning in Freespace 2.

In terms of gameplay, Freespace 2 is basically a 'bigger and better' Freespace. Capital ships now have awe-inspiring proportions and are able to fight each other. This makes for many a memorable scene when you are caught like a tiny fly in the middle of capital-ships-only combat with cannons and turrets and huge beam weapons that are wider than your spacecraft. The game universe is much larger than in Freespace. Volition also adds a lot of nice graphical details, such as the cool-looking (and appropriately opaque) nebula, on top of much prettier 3D graphics. There are many new ships in the game in addition to all the ships from Freespace, more varied and more powerful weapons, and more diverse missions. The strategic aspect has also been much improved: your success in some missions depend as much on your strategic choices as your joystick expertise. Should you send a couple of wingmen ahead to recon enemy ships, or have them protect vulnerable ships? Should you take out the enemy bombers first, or the agile fighters? In-game choices such as these can spell the difference between life and death.

In addition to the superb single-player campaign, Freespace 2 includes full multiplayer support: up to 12 players via LAN or the Internet (PXO and SquadWars.com), or head-to-head via modem. In any of these modes, you can choose to fly co-op, team-based, or free-for-all dogfight, with many different missions to choose from. And to add even more bang for the buck, the game includes FRED2, a full-featured editor that you can use to create your own missions and campaigns. With an epic-sized space operaic plot, gorgeous graphics, top-notch space combat action, optional missions and multiple endings, and virtually unlimited replayability, Freespace 2 is a must-have for all armchair space pilots.

The year is 2367, thirty two years after the Great War. Or at least what YOU thought was the Great War. The seemingly endless tide of Shivan capital ships, bombers and fighters with super advanced technology was nearly overwhelming. As the Terran and Vasudan races finish rebuilding their decimated societies, a disturbance lurks in the not-so-far reaches of the Gamma Draconis system. Your nemesis has arrived... and they are wondering what happened to their scouting party... 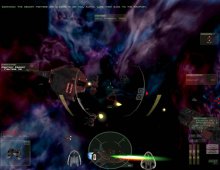