Virtua Cop is a decent PC conversion of a hit arcade game of the same name by SEGA. Your objective in this 3D shooting gallery is simple: as a cop, move through various areas of a city, eliminating any criminals that get in your way. At the same time, you must avoid shooting any innocent bystanders. There is a boss at the end of each stage that must be defeated before you can move on. Any of the three stages can be selected from the opening menu, although the increasing difficulty level only makes sense if you play them in order. Some nice touches, despite the game's brevity: you receive bonus points if you can shoot the target's weapon out of his hand, sparing his life ("Justice Shots"), and there is a practice mode that lets you practice - it even includes the innocents so that you can practice avoiding them. All in all, a fun game and a reasonable replica of the arcade hit, although it is rather short, and too easy if you play with a mouse. Recommended, but check out the much better sequel Virtua Cop 2 for a longer and more rewarding shooting gallery. 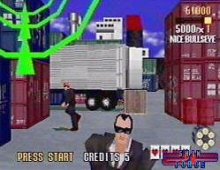