Kingpin is a great FPS from Xatrix/Interplay that remains largely underrated - mostly because of numerous bugs in the first release that were finally fixed. Although it is not a "classic" in a sense that Half-Life is, it is still an excellent game that offers innovative multiplayer modes, the ability to call on your subordinates (thugs) for help, and great atmosphere. Experts at FiringSquad have the lowdown:

"The story in Kingpin involves you getting dumped into skidrow as just another worthless thug. Your goal is to work your way back up and find out who beat you up and enact some payback. As you walk around the inner city you interact with various denizens to find out what's going on; along the way you earn some extra cash to buy weapons and hire some sidekick thugs. Eventually you will work your way up to be a fullon criminal Kingpin.

Kingpin's roots lie in the Quake 2 engine, but that's not immediately obvious by looking at the game. Kingpin's graphics are fantastic - with quality well above Quake 2's and comparable with Half-Life. Many others have commented that the game does look a lot like HL, but with dynamic lighting and shadow effects, Kingpin's visuals stand out on their own with no need for comparison. All the textures look exquisite, and the blood and gibs from your kills look quite convincing. The palette used on the textures focuses a lot on grays to give the player a sense of dinginess and urban decay, but there's enough color in the game from neon signs and such that show the engine is capable of being flashy too.

Kingpin doesn't stray from the simple interface that makes first person shooters so easy to play in the first place. The HUD is simple and uncluttered, keeping most of your view open to admire the pretty graphics. The amount of money you have is in the upper right, while health and armor values reside in the bottom left. There are three kinds of armor you can have, which can protect the three zones of your body. Helmets cover your head, flak vests cover your torso, and pants can protect your legs. The amount you have on each part is represented by a number next to the silhouette of a thug. In the bottom right are two numbers which show how much ammo is currently loaded into your weapon, and how much ammo you have remaining outside your gun. The weapon currently in use shows up in your hand (duh). If you have any hired goons with you (single player only), these are represented by thug figures in the bottom right. The amount of damage they have taken shows by the figures filling up with red.

Kingpin has a relatively small assortment of weapons, but all are "realistic" and have their own charm. Generally speaking, the weapons in Kingpin are pretty powerful, which makes for quicker kills in deathmatching and in single player as well. Beware though, because each has a relatively slow refire rate - pick your shots carefully or risk getting owned. You'll also need to worry about reloading your weapons, which takes time. The last place you want to be doing this is in the middle of a fight so keep one eye on your ammo levels. Weapon switching is a bit slower than I would have liked but this helps keeps things realistic.

The single player missions in Kingpin have improved a lot since the demo. After playing through the demo when it first came out, we bemoaned the wide use of keys and "find the key to open the locked door" type of gameplay. It looks like Xatrix has learned from this and at the very least, is disguising the key hunt game by using a bit more NPC interaction. Now, you're doing a lot more looking for items that NPCs need, which integrates a bit better with the overall story. Now the only complaint here is that the single player game seemed a bit short - it doesn't take more than a couple days' worth of serious playing, maybe even one day, to complete the entire game. I guess this is one of the ways that Kingpin shouldn't be compared to Half-Life. HL's single player game seemed to be longer and offer a lot more value. Still, Kingpin's single player game is an entertaining diversion, but probably not the main reason I'd buy this game.

The highlight of Kingpin is definitely the Bagman multiplayer game. Bagman is a variation on CTF, but with a decidedly unique and criminal twist. There are two teams in each Bagman level, and each team has a safe, each of which can only be opened with a switch located near the safe. A central money area exists between the two team "bases" where money randomly spawns in. The object of the game is to collect as much money as possible and deposit it in your safe. After a while though, it becomes worthwhile to raid the enemy safe for money and deposit it into your own. It's like killing two birds with one stone - they lose money and you get more. You can steal a maximum of $200 from the enemy safe at once, and if you have some stolen cash, you carry it around in a bag that's readily visible on your person, marking you as a thief. You can carry additional "loose cash" that you find lying on the ground but only $200 can go in your "bag." If you kill a bag carrying thug, they drop their bag and you can pick it up (provided you're not already carrying one yourself). The object of the game is to have the most money in your safe at the end of the time limit, or be the first to reach a set cash amount (usually $2000).

There are too many bugs and quirks to fully recommend Kingpin. We can clearly see the potential in the game due to its jaw dropping graphics, great sound effects, a great set of weapons and nicely designed levels for multiplayer. Also, Bagman is one of the coolest multiplayer mods we've played in a while. However, the long level loading times, the multiplayer hanging bug, and the steep system requirements weigh on Kingpin a bit too much. There's a fantastic game under here, but unfortunately we might have to wait until after a patch or two to feel the full force of it. If you've got a beefy system, or are a big first person shooter fanatic, then run out and get Kingpin today. Otherwise you might want to wait and see how the patch improves things." 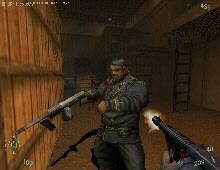 People who downloaded this game have also downloaded:
House of the Dead 2, The, Blood 2: The Chosen, Metal Gear Solid, Daikatana, System Shock 2