One of the most "hyped" games in the history of PC gaming, Daikatana is an ambitious FPS, a brainchild of id Software legend John Romero that is more famous for suffering through innumerable development hiccups than the finished product. The resulting game is, I think, better than most critics believe, but still far from the lofty standard of Quake or Deus Ex. With less problems during development and more Q&A time to iron out gameplay imbalances and bugs, Daikatana would have been a true classic. Unfortunately, we are left with a mixed product that fluctuates wildly between "amazingly brilliant" and "ridiculously difficult." Excerpts from action gurus at Firing Squad and Adrenaline Vault aptly describes this ambitious game that unfortunately could not be all that it can be:

"Daikatana was meant to introduce ambitious new ideas, and indeed, the final product embodies the richness of content once missing from 3D shooters. The story stretches across four huge episodes that encompass an amazing amount of material. Even the well-implemented plot affords the impression of a mini-epic. An opening cinematic sets up a promising scenario: In 2455 in Japan, an expert martial arts instructor named Hiro learns from a stranger that he must liberate the world from a corrupt scientist. Called Kage Mishima, this scientist has stolen an enigmatic sword that has the power to help him thumb through time and accomplish the all-too-familiar goal of ruling the cosmos. The stranger also pleads with Hiro to search for his missing daughter, who is trained to use the sword. Given that the weapon was forged at the hand of Hiro's ancestors, it seems the perfect warrior has been selected for the quest.

Let's get this out in the open: Daikatana isn't SiN, it isn't Duke, it isn't Half-Life and it isn't Soldier of Fortune. You can't destroy or activate 99.9% of the entities in the game. Interactivity is at an all-time low since Quake II. The things you can destroy are either extremely obvious and necessary to go on in the game, or will totally surprise you. Level design is a combination of the horrendously unspeakable and the good. Mod authors, expansion makers and aspiring level designers everywhere - suffer the pain and play through Episode 1 to see how to never, ever in your entire lives build a level. Aside from the ice research station, there was not a single map I could play through in a single sitting without at least pausing the game, if not leaving altogether to get some fresh air. Not only do they play bad, but they look very bad. The outdoor scenes and the ice research station are actually bearable, but the rest is puke. The texturing is awful and the levels are way too dark. They're this annoying brown-red tint to everything that looks worse than any browns in Quake II ever did. Original Quake levels in 320x200 software mode were better looking. In Episode 2 and 3 matters pick up drastically. The levels are interesting and look really cool (especially the Plague Village in Norway.) Maybe it was just the fact that I played through Episode 1 right before, but Greece and Norway looked really cool. The village is almost realistic in design, while Greece is just full of giant palaces and clear, bright colors. Episode 4 returns to a gloomier palette but at least the levels don't give people migraines.

Daikatana has far, far too many stupid points to laugh off. The number of times you'll find yourself running back for your sidekicks is beyond count. Often, it's deliberate - they'll say they'll stay in an area while you go ahead and open a door. Sometimes - especially at later levels - it just happens. In Episode 1 we finally figured out how to get past this insanely pointless yet difficult and illogical puzzle, only to see that it's not the right way, the 'sidekicks-will-follow-you' way. Why is this a problem? It's a problem because you need both crack babies with you to leave a level. Fortunately, the puzzles ease up on later levels, but this only keeps the status quo. You see, as you progress through levels, you see the at-first useful and competent sidekicks degenerate into deranged morons who routinely wander off or go head-first into a trap. Around the third or fourth time that one of the sidekicks shoots and kills itself, you or the other sidekick, you will probably be wondering why your mouse hand is sore and bleeding. Don't worry, that's only your own teethmarks on there. Generally it's not actually them killing themselves, it's you killing them.

Daikatana was touched at the hand of countless designers during its protracted development, but it is impossible to separate the final outcome from its lead architect, John Romero. His blueprint included a strong plot as well as awesome new sights, monsters and weapons around each turn and bend. This is not a one-note game, but a content-rich product that manages to transform its core elements four times without losing focus. The plot also has considerable impact, incorporating an unexpected twist at the end as well as a final "shot" that has genuine emotional pull. In these areas, Romero succeeded. He also wanted to soup up the standard 3D shooter model with computer-controlled companions--no longer a radical idea since the emergence of the squad-based tactical action genre--and while there are some definite rough edges, the two supporting actors manage to spice up the proceedings when functioning. In addition, Romero set out to firebrand the release with the heedless abandon of a classic first-person romp, and there are moments when the action has the sheer ultra-intensity of his games at id.

Still, the final product does not manifest the qualities that a talented team with a singular goal and proper guidance can produce. As much as I wanted to settle into Daikatana's classic shooter vibe and just be entertained, I could not ignore its substantial discordant harmonies. Most damning is the crude programming, the inconsistent map design and the jagged artificial intelligence. Furthermore, despite the abundance of graphical themes, monsters and weapons, ION does not furnish the one thing fans want from a first-person shooter: A vision we have never encountered. Although fun and proficient at times, it also comes across as a sometimes lusterless simulation of better titles. Despite an abundance of ambition, time was not on ION's side." 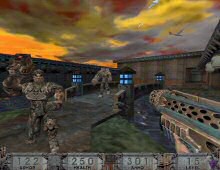