Raiden II is an excellent sequel to Raiden, one of the best shoot em-ups ever made. The game is not very well known due to its limited distribution (sold in Japan only, ported by Cyberfront Studios), but that doesn't stop us from honoring it here, of course ;)

The plot picks up where Raiden left off. It's been 3 years since you utterly destroyed the alien forces and sent the survivors packing. But the angry stragglers, bent on revenge, returned to their planet and raised a vicious army. Now they're back, tougher, meaner and better armed than before. To turn the tide of battle, the members of Earth's Think Tank regroup, and develop an even more powerful and maneuverable fighter craft... and guess who they put in the cockpit?

Raiden II has all the addictive gameplay of its predecessor, this time with even sharper graphics and a rocking soundtrack. The graphics are very more detailed, with excellent 3D effects (e.g. flying enemies cast shadows on the ground, so you could distinguish them from ground-based enemies). In contrast to most shoot em-ups where enemies you destroy just blow up and disapear without a trace, enemies in Raiden II blow up, turn into a wreckage, plummet to the ground, and only then explode on impact. This causes a lot of debris to fly around the screen, which in turn cause nice ripple effects on the grass and even on the water once they land -- very, very nice. Background graphics are also excellent, especially in the volcanoes levels.

In addition to the myriad of power-ups and weapons that made Raiden a classic, Raiden II features a powerful new weapon called the Plasma Laser, and new Cluster Bombs: unique defenses that make it nearly invincible against the aliens... but only if you are nimble, of course. No doubt the best weapon in the game, the Plasma Laser homes in on the target, and locks on it until you move or it blows up. The enemy bosses are tougher than in Raiden, so even joystick experts will find a nice challenge in this one. Overall, Raiden II is a polished and addictive vertical shooter in every respect.. a must have for all action fans!

Note: The game is in Japanese, but most menu commands are either in English, or are self-explanatory. 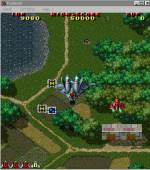