One of those top-down shooters that flooded the scene during the late eighties and early nineties, Raiden is no different than the others. Fly around and shoot at anything you see is all you gotta do, but good thing is that you can do it with a friend instead of flying around alone.

As you shoot at everything you will be able to collect various gun and rocket upgrades as well as to collect bombs and extra lives. Brainless shooter for the end of the hard working day.

You control a fighter place/ship in which you destroy the on coming pilots/boats/groud units. Very simple and quite fun, though it does get a little repetative, this game gets very hard. As it's one hit, one kill for the enemy.

Quite a good game with decent graphics and fitting sound as well but only a 7 because of the over and over style gameplay it has which is a bit sad as it would otherwise be a much better game.

Raiden is a good PC translation of a popular console shoot-em-up. Standard fare here-- shoot baddies, collect power-ups, and overcome end-level bosses. The plot: Mother Earth has fallen to deranged aliens. Now, as pilot of the Raiden Supersonic Attack Fighter, you must rip through the enemy lines and mount a daring counterattack. Raiden successfully enhances the vertical-shooter excitement of an all-time arcade favorite with brilliant sounds and exceptional speed and motion. All the ingredients of a great shooter are here, but the extremely unforgiving gameplay will leave newbies wishing for an easier game. Recommended to expert gamers only or those looking for a real challenge! Also be sure to check out the excellent but little-known sequel Raiden II, also on this site. 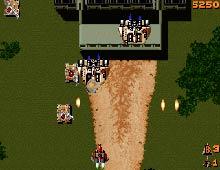 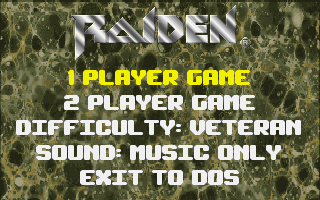