As commander of the starship Enterprise in War Encounter, your goal is to destroy all parts of your enemies' ships. If you crash into the planets you will die, but you can - strangely enough - destroy the planets with enough hits. There is a variety of missions too: some missions require you to protect other Federation ships or planets. Naturally, hits will damage your shields which recharge slowly. When your shields are gone, further hits will damage your weapons and engines, which will reduce firing and moving speed and eventually destroy them. The game supports several multiplayer modes, including serial connection, modem, and IPX network. In a nice twist to the single player game, you will continue to get new ships in multiplayer as long as your homeworld exists. This makes destroying the homeworld a priority for all players.

STCS takes the tactical simulation approach to recreate the feel of space battles. You can construct your own fleet by choosing any ship from the various races of Star Trek, including starbases and outposts. Then you do the same for the computer-controlled opponent, then engage in battle to the death. Although you have to be strategically shrewd as well as quick-fingered, you don't have to worry about many elements in most other Star Trek sims. For example, the game has no energy allocation, shield boundaries, hex-grid maps, damage allocation, or any dice rolling. Instead, the focus is on ordering various ships in your fleet in a co-ordinated attack.

Both War Encounter and STCS are fun and more than competent fangames that will appeal to Star Trek fans and anyone else who enjoys good space battles. Both games sport crisp, clear graphics that make it easy to tell different races' ships apart from each other. Whether you are an action gamer or space commander, take your pick from this pair of fun old games. 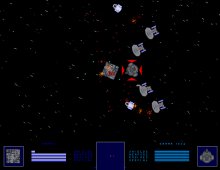