Klingon Honor Guard is a superb first-person shooter set in the Star Trek universe. Designed by MicroProse and released in 1998, KHG was definitely the first Star Trek computer game in a long while that broke the trend of mediocre Trek games (including MicroProse's own very disappointing Star Trek: Generations). Based on acclaimed Unreal engine, KHG looks great, and captures the mood of ST:TNG almost perfectly. The only downside - at that time - was the hefty system requirements: at least a P266MMX, 64MB of RAM, and preferably a 3D accelerator. Given that these specs are below an average PC today, most gamers are in for quite a treat.

KHG casts you as a newly appointed member of the Klingon's Honor Guard: the Empire's most elite group of warriors and bodyguards to the Emperor. As the game begins, you learn of the assassination attempt on the Empire's Supreme Chancellor Gowron. Being new with no idea about what is going on, you are chosen to investigate the conspiracy and pays back the assassin - Klingon style.

If you have played Unreal or any game based on its engine, you will know what to expect in KHG: a wide variety of enemies and weapons, fluid action, and excellent background details. You will battle in many Klingon locations including a suburb, the penal atroid Rura Penthe, and even the interior of a famous Bird of Prey spaceship. In true Star Trek spirit, you will make use of various gadgets throughout the game, including the tricorder, combat goggles, and of course the very deadly D'k Tahg dagger and spiky Bat'Leth sword, two traditional Klingon weapons. Also like in Unreal, the enemy AI is excellent. Your opponents will stage ambushes, and they do dodge and fire accurately especially on the "Klingon" difficulty setting which I find very challenging. Multiplayer, via IPX and Internet, is supported, although the levels are not very interesting for multiplayer action.

Overall, KHG is an excellent FPS that does the coveted license the justice it deserves. It is very faithful to the spirit of the TV show, and will hook even non-TNG fan for hours on end. Highly recommended for both TNG fans and FPS gamers in general. 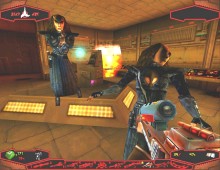