For all those Trekkies out there - this is YOUR game! I've always liked Star Trek (especially the original series) and I got VERY happy when I was able to get my hands on this one. A solid adventure with that good old Star Trek-Humor in it. You have to solve several missions, do some space-fighting, everything you could expect - it's there! Ever wanted to command Spock around? Or Bones, Scotty, Chekov...? Or one of those guys in red who got killed almost everytime they showed up in the old series? And there is a good chance that exactly THIS happens to them even under YOUR command!

You NEED the map - it's the starmap and without it you cannot navigate from mission to mission.

One of the best Star Trek adventures ever produced, 25th Anniversary has it all: excellent plot (in each of the game's "episodes"), good puzzles (including multiple solutions that may not yield optimal 100% score), and great graphics. You control Captain James T. Kirk and his crew as they explore the universe. The only downside in this game is the combat, which is frustrating for us non-action gamers but thankfully can be won at "easy" setting. Highly recommended.

Most Star Trek games were total failures. Fortunately, this is not one such game. Star Trek: 25th Anniversary is not just a good, but excellent game that wonderfully combines elements of an adventure, space simulation and action in one. It was made to celebrate 25 years since the first episode was shown on TV and it offers you a chance to see how it is to be Captain Kirk and how it feels to be in charge of one of the most famous starships ever made - the Enterprise!

The game is made of several episodes, each with its own goals, which create one full, great story. While on Enterprise, you will have full control over the ship (raising and lowering the shields, arming and firing weapons, repairs, navigation...) and this part feels like a real simulation. Once you teleport to the planet surface the adventure begins. This is when ST:25th A becomes a standard point-and-click adventure with action elements in case you get attacked.

The graphics in the game are far from spectacular but aren't too bad either. The interface is easy to use BUT it sure would help if the icons were captioned. You will need some time to find out and memorize what does each icon do and how to get to it.

This is definitely one game that you should play and complete. It is very fun, especially since the early game is quite easy - just enough to make you addicted! Recommended!

This game is sort of a pioneer for Star Trek games. From away team missions to ship-to-ship combat, the entire game captures the essence of the original Star Trek series. The game is not hard to play and is fairly self explanatory.

During game play, the player is able to come in contact with all of the major favorites from the original Star Trek series, including the Klingons, Romulans, Harry Mudd, and many others. The characters of each crew member is captured quite well with "I'm a doctor, not a target" from Doctor McCoy, "That is not logical" from Mr. Spock, and of course, "Ah!" from the random guy in the red shirt, who you have the option to kill or spare on each away team mission.

Anyone that downloads this game without prior knowledge will be at somewhat of a disadvantage for the first mission. Each mission begins with a briefing from a Starfleet admiral who will give you the "coordinates" of your destination. These coordinates are a number, which correspond with a star chart for the helm. The chart, which can more than likely be found somewhere online, is found in the game manual which came with the game disks. Clicking on the wrong star system will send the Enterprise off course into enemy territory, where it will have to do battle with one or more hostile ships. So I guess what I'm trying to say is: if you are going to download this game (and you really should if you love Star Trek), before you start to play, take a few minutes to look around for a website where some kind soul has supplied the star map. It will make game play SO much easier.

Also be advised that away team missions require some thought. The solution to a problem presented on a mission may not be as simple as it originally seems. Be patient and don't expect to get it right on the first try! Other than this, the game is fairly simple when compared to many of today's games. While it certainly makes the game more entertaining, knowledge of Star Trek is not needed to be able to successfully play this game. The only thing that will happen without knowledge of Star Trek will be a few unexpected moments.

Having said all of this, if you are still interested in playing, go download yourself a star chart and "boldly go" into playing this truly amazing game. 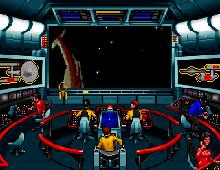