After resting on their laurels, Interplay is back with an even better and longer sequel to 25th Anniversary called Judgment Rites. Although gameplay remains the same (after all, it's a prudent "don't fix it if it ain't broke" philosophy), the plot this time is more complex and puzzles more difficult, which means that "optimal" solution is less obvious. Unfortunately, frustrating combat is also back, and dialogues are tedious at times. It's still a great game, however, and worthy of every adventurer's collection. 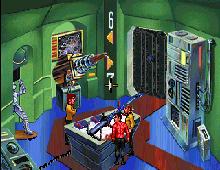