Take control of the starship Enterprise in this conversion of a good Commodore 64 game, which tried too hard to be everything -- taken separately, none of the action, strategy, and adventure elements are truly on par with the best in respective genres. But the whole in this case is greater than the sum of its part, and the game has that strange, alluring quality that kept me playing. Or maybe it's just that I'm a sentimental, nostalgic Trekkie :) 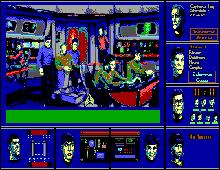