Arguably the best Star Trek adventure game ever made until Interplay's 25th Anniversary, this Simon & Schuster text game is actually stronger than its better-known sequel, The Kobayashi Alternative, because it has better puzzles, more interesting plot, and authentic characters (especially the cynical comments from Bones). As captain Kirk, explore the Promethean's planet to find food source lest your crew starves to death. The game's interface is functional and does a good job of mimicking the Enterprise's bridge: the screen is divided into Text window (where text appears), Kirk window (where you type commands), Status window (including the ship's location and destination), and Conversation window (which pops up when a character addresses you, with different colors for each character). Overall, Promethean Prophecy is a fun game recommended for all Star Trek fans-- but beward of several time-limit puzzles and ignoring the Prime Directive! 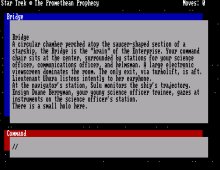