Last of the Star Trek trio of games Simon & Schuster and arguably the best, First Contact continues the exploits of intrepid captain James T. Kirk and his crew abroad the starship Enterprise. Your mission this time starts with transporting a diplomactic party to unexplored planet Gothica. As is typical of the series, this innocent mission soon evolves into a potential galactic war, and it's up to you to save Starfleet and the Federation itself.

The game's interface is still the effective multiple-window presentation used in the previous 2 games, with some additional commands such as the ship's computer (F7 key) that contains both useful and serendipitous tidbits of knowledge on subjects ranging from the various characters to the different aliens and planets you will encounter. The captain's log now keeps track of all major actions you performed, and you can add records of the current play session to the log (similar to "LOG ON" command in other IF games). crew members now exhibit a much wider range of responses that are appropriate in the situation. Overall, the additional features and more authentic Star Trek atmosphere and plot makes this the crown of Star Trek IF trio.

The last in the series of S&S Star Trek textual adventure games, First Contact is probably on of the best ST games! It has no graphics at all (except for the big black screen with light dots representing the space and stars :) and the sound is miserable, but what matters is the gameplay. And it's very addictive!

The game continues with the famous expeditions of James T. Kirk and his crew aboard the world's most famous spaceship Enterprize. Your starting mission is to escort a diplomatic party to Gothica, a planet inside the neutral zone. As usual, something goes wrong and an easy mission evolves into a big trouble and a possible intergalactical war!

The controls in the game are quite easy, although it won't look like that once you start the game. You will have to use the function and cursor keys and, when neccessary, type the commands (but they are usually simple answers to questions or turbolift commands).

Overall, this graphicless game is a great gaming experience. Live it up! 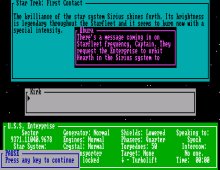