A disappointing game based on the Star Trek movie of the same name, Final Frontier's quirky combat controls and lack of real interactivity in the plot department sank the game faster than James T. Kirk's phaser draw. The game's excellent VGA graphics did little to improve things, so this game is really for die-hard Trekkies who simply must have every Star Trek game ever produced . The rest of us would do well to steer clear of this game. 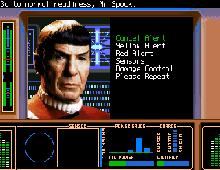