Probably the very first giant robot game that can proudly claim to be a simulation than a straightforward action shooter, Mechwarrior is a great game set in FASA's famous BattleTech world of giant robots. It was, and still is, one of the best BattleTech games ever made.

In this game, you play a young man whose reputation has been soiled by an evil usurper. You have five years to build a force of giant robots and great pilots strong enough to attack your foe. Take on mercenary missions for any one of the 5 houses from the first generation world of FASA's BattleTech (Kurita, Davion, Steiner, Marik, Laio). The missions themselves take place from first-person perspective, in 3D-rendered worlds, where you pilot your robot, fighting other robots of the same ilk.

Gameplay, based on Dynamix's excellent physics model used in its early flight sims, is top-notch. Robots move convincingly, and the 3D polygonal graphics are exciting for its time. Add some slight roleplaying, team building, planetary intrigue, and goofy EGA pictures of non-player-characters and you've got a great classic that goes a long way toward immersing you in its world. The role playing was primarily textual - reading paragraphs, choosing between fight or run, and then being killed or moving on accordingly.

The game's main focus, robot fighting, is very exciting. Combat usually lasts under 10-20 minutes because the maps are small, the opponents are few (<5) and the objectives limited to one (ie, eliminate your enemies; capture the base, etc.). You can order fellow mechs to attack or defend or back you up. Even with the rudimentary figures however, units can move and jump, and occasionally enemies would surround you and effectively pound you into scrap. If you are able to train your lasers on their heads, you might score a direct hit, or if you could attack their legs, you might see a mech doing a one-legged hop. Heat was a factor - if you shot too much too fast, you might crash your system. These are all the elements that characterize the more sophisticated mech combat simulators (Mechwarrior 2 and 3), just with less dense graphics and more abbreviated gameplay.

Overall, Mechwarrior is a must-have for anyone even with a slight interest in giant robot games. It sets the standard for other games in the giant robots genre, and its role-playing elements are sorely missing from today's mech games where the focus has shifted to strategy and 3D graphics than plot and atmosphere. 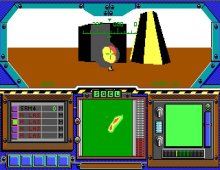