Set in the same futuristic universe of gigantic robots' warfare, the sequel of BattleTech: The Crescent Hawks' Inception continues the story of the young MechWarrior Jason Youngblood and his quest to rescue his father and retaliate.

BattleTech: The Crescent Hawks' Revenge, unlike its role-playing predecessor belongs to a different gaming genre, is a "real time tactical" wargame. From a top-down perspective we lead our BattleMechs against the enemy warrior machines in a series of scenarios. The outcome of every encounter will be determined by the way we manage our units and the orders we give to them. Every BattleMech type has a different combination of attributes and capabilities. Each one varies in firepower, speed, armor and generated internal heat. Periodically during the game, we get the chance to form the teams of ?Mechs under our leadership, based on our instinct and playing style.

During combat, through the command menu we can determine the moving speed of our robots, set the waypoints of their movement path and also designate their targets. To be victorious, we have to closely inspect the battlefield and take the right decisions on issues such as the how and when to engage the enemy, the formation of our forces and the terrain on which to move and fight. A handy feature of the game is the ability to adjust the playing speed, this way we can watch the battles unfold without been overwhelmed or pass swiftly through low-activity phases.

Both the graphics and the sound are still bearable and will not negatively affect the gaming experience. Due to its complex elements and mechanics, BattleTech: The Crescent Hawks' Revenge can often get difficult and frustrating. Nevertheless, it is a very interesting and original game, clearly ahead of its time. Giving it a try is definitely recommended at least for historical reasons, as it is one of the pioneers of the real-time strategy genre. 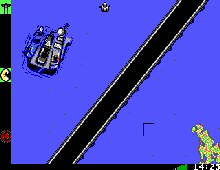