You are Jason Youngblood - a cadet of the Lyran Commonwealth on the world of Pacifica. Jason is a budding Mechwarrior, who wants to be like his father Jeremia Youngblood who is seen as a legendary Mechwarrior on Pacifica. You start in a training facility somewhere to the south and you are to go through training missions to make sure you're ready to handle yourself in a Mech - the first missions are simple enough as trying to find a piece of rubble and making it back to the Training Facility on time, it gets harder however when your mission is to take on odds that are well stacked against you. Being like an RPG, you need to gain skills in different things - Bows & Blades, Pistols & Handguns, Rifles & SMG, Mech Piloting, Mech Gunnery, Tech, and lastly Medical - however, Jason isn't as skilled as some party members that you'll later encounter in the game, he can be a Grandmaster in all skills other than Tech and Medical which are specialist skills in which you need to recruit someone to have the best. Lastly, to earn money you need to invest all your spare C-Bills into a company of your choosing - however, like the stockmarket in reality you have the chance of your share value going up, or else plummeting to a point in which you're left with nothing. It's a good idea to start investing your money right at the start so it builds up over time, just so you can buy all those bits and pieces later on in the game such as Mech upgrades and repairs.

Another Infocom masterpiece - Battletech has an excellent plot, and a lot of immersive detail. The most challenging part of the game would have to be the puzzle at the end. The majority of the game is spent wandering around the world in search of combat experience, however it's wise to avoid a lot of fights at the start though, the rest is trying to find clues as to where your father has disappeared to, and discover where a secret cache of Mech equipment is kept, you might even discover a rare Mech somewhere near the end of the game.

As the first and only RPG based on the well-known FASA giant robots universe (Battletech 2, not developed by Westwood, isn't an RPG but a turn-based tactical strategy game), The Crescent Hawk's Inception does not disappoint. Westwood again masterfully weaves an addictive blend of action and traditional RPG into a captivating game, with an engaging plot that follows the adventure of Mech pilot Jason Youngblood from his apprentice days and beyond. Truly a game that sets new standards for the genre, and foreshadows many successors to the FASA license. 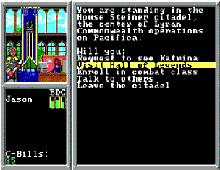