Vigilante is a superb remake of IREM's 1988 arcade game of the same name that does what all remakes should do: enhances the gameplay while maintaining the same 'feel' and atmosphere of playing the original. Coded for Windows, this is a beat 'em up in the same vein as Double Dragon. The game boasts almost the same graphics as (but better than) the arcade classic, with 5 huge levels that arcade fans will be happy to revisit. The enhancements come in the form of gameplay polish: you are no longer "stuck" at corners of the screen, for example. Designer Yves Rizoud also added new elements, including five weapons (the original game has one), excellent stereo sound effects, and the ability to record and play back demos (even over the whole game). Overall, if you spent countless quarters on the original, this remake is a must-have. If you have never played the original but love beat 'em ups, this is also a must-have. 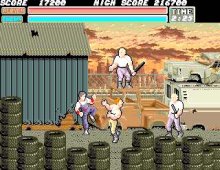