Pinball Mania was the fourth pinball sim published by 21st Century. In contrast to the superb Pinball Dreams/Fantasies/Illusions trilogy, Pinball Mania is a very disappointing game that does not bode well for 21st Century's in-house developing team Spidersoft (who would, amazingly enough, go on to make a lot more mediocre pinball games).

Pinball Mania offers 4 tables of varying quality. Let's say all the good things first: all the tables are nice looking (although much inferior to Pinball Illusions), with 4 flippers on each table and a neat LED display. Tables are nicely designed and detailed; the "Casino" table deserving special mention for an innovative idea: it combines pinball with gambling games that require both skill and chance.

And... well, that's all the good things I can think of. Despite good graphics and some nice ideas, Pinball Mania falls flat in the area that matters the most in pinball games: realistic ball physics - or in this case, the lack thereof. The ball moves slower than a slime crawling underwater. What's worse, the reaction of the ball to the flippers is far too slow and horrendously bad, especially because it is almost impossible to shoot accurately, as the ball appears to behave in a completely random fashion. Sometimes you would be able to send it back up the table, and sometimes the ball would react to a high-powered flipper pull. But you will spend most of your time wondering how you ever manage to get a high score, if at all. All in all, this is a thoroughly disappointing and unrewarding pinball game. Steer clear of this one - there are many better games to be had. 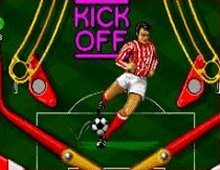