Sequel to Pinball Fantasies, Pinball Illusions is the last game in Digital Illusions' trilogy of pinball games and they finished it off with a bang! =) The conversion of the AGA-only Amiga game was done by Frontline Design, and as with Pinball Fantasies they did an excellent job with it. The game features three tables, namely Law n' Justice, Babewatch and Extreme Sports. All three are fantastic. One notable new feature is multi-ball, also the overall feel is even more realistic. The graphics are great, as again are the sound effects and the music by Olof Gustaffson. An excellent game and for sure the ultimate 2D pinball game on any system. This is the floppy version of the game. The CD version has four(?) tables and CD music. 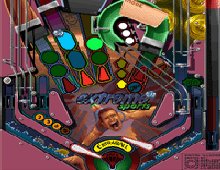