V-wing is a funny little multiplayer flight shooter game. Please note that this game can only be played in multiplayer mode and it isn't possible to play against the computer at all. You can play up to four different players at once. Yes you read it right - the developers have managed to setup the game screen so you will be able to see each of the spaceship you control. While it does look confusing at first you will get used to it when all that matters is to shoot down one of your friends.

The spaceship you control is a very little one and you view the game from the side of it. As mentioned the spaceship is small and it has to be since the game is divided up into four small screens (even if you only play two which is a bit sad that they didn't make it so the overall game interface changed depending on how many players you are). The controls are quite hard in the beginning at least when you use the keyboard (it is possible to use joysticks for all players if your hardware supports it) but once you get used to the fast paced gameplay it can be quite funny to play.

V-wing is a very simple made purely for multiplayer fans and it does well considering the resources available for the developers. It isn't one of the best games in the game history but it offers enough for that some people will find it interesting. The graphics are simple and so is the sound. But that doesn't matter much as long as you like to compete with your friends.

V-Wing is one of the best "cavefliers" games ever made. Cavefliers is an action sub-genre that was very popular in that country in the early 1990s, inspiring many authors to release shareware and freeware cavefliers of their own. The idea behind the game is the same as in every other caveflier: maneuver a small ship in tight caverns, blasting other ships to smithereens with a formidable arsenal weapons while fighting gravity and being careful not to hit the terrain.

The ships human players (including you) control in the game are called 'V-Wings,' while those controlled by the computer are called 'H-Wings.' Your ship comes equipped with a standard gun and a secondary weapon which can be changed at the start of every fight. The standard gun has unlimited ammo, but the secondary weapon requires reloading once the ammo runs out. You can get more ammo and repair any damage your ship sustains on a 'pad,' which you of course must find first.

Although the shareware version includes only 5 weapons and two levels, the registered version (for download here) offers many more weapons and levels, as well as settings that allow you to change just about every aspect of the game. The graphics are inferior to Tappo II, but the fluid action, huge levels, and very well-designed levels more than make up for the lack of graphical detail. The game even includes a level editor you can use to design your own levels in which to blast friends. If you enjoy cavefliers or shoot 'em ups in general, V-Wing is definitely well worth your time. This download is v1.91 registered, which includes gun terrets. 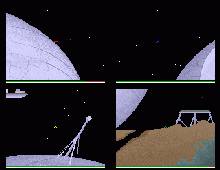